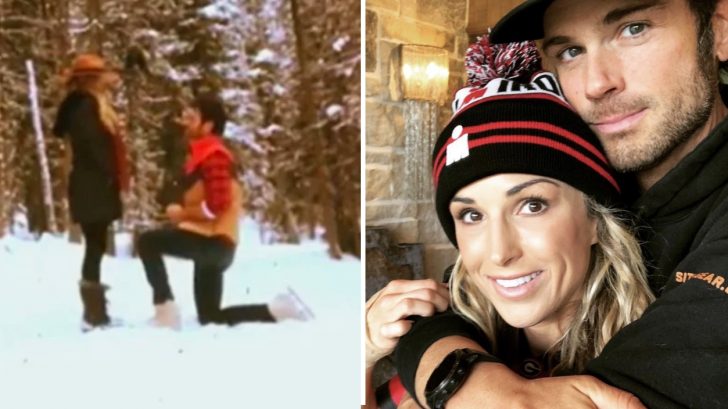 Country singer Chuck Wicks has been in the country music scene for some time. He’s released hit singles like 2007’s “Stealing Cinderella” and is also a co-host of a very popular country radio morning show, The Ty Bentli Show (formerly Ty, Kelly, & Chuck).

Over the years, he’s attended many industry events from awards shows, to album premieres, and everything in between. He frequently saw a gorgeous blonde woman at these events, and little did he know he would end up being engaged to her years later.

He always saw this woman with another man so he never went up to her, but the 2018 ACM Awards changed everything. She had gotten a divorce from her husband and he found out she was actually his good buddy Jason Aldean’s sister, Kasi Williams. Jason’s wife Brittany encouraged Kasi to approach Chuck and after some Instagram flirting, they went on their first date.

The two made their Instagram debut in July 2018 and have been inseparable since!

At the beginning of March, the two went on a Winter Wonderland vacation in Canada where he was planning on proposing with a ring he’d been hiding for four-and-a-half months. He set up a tripod and made Kasi believe they were going to take a photo, but he actually got down on one knee to ask her to marry him!

About last night….. I lOVE YOU @kasirosa ❤️ We could hear a pin drop in that woods. Nothing but us and the snow falling. It was absolutely perfect. Even if the camera stand I got just for this moment was having some issues. Lol. I’ve waited forever for you and now I will forever be yours. #arewedreaming

If you’re like us and were thinking that it had been a few days since the engagement and we hadn’t actually seen the ring yet…look no further! The soon-to-be Mrs. Wicks shared a photo of the gorgeous sparkler on Instagram. Check it out below!

DREAM guy, DREAM story, DREAM everything. Pretty cool to have @people capture our story ❤️ link in bio on how it all went down… I actually found out stuff I didn’t even know beforehand! ? @chuckwicks

The newly-engaged couple want to waste no time in getting hitched. Wicks told PEOPLE that if they can get the right venue, they plan on marrying as early as this fall!

They can’t wait to grow their family – Kasi is already a mom to an eight-year-old daughter Avery, and her ex-husband’s teenage daughters, Maddie and Makenzie Morstad, all seen in the series of photos below.

Just over here tryin to get a normal family photo with this crew… I think we finally got ONE. The camera kept snapping and we kept posing. #merrychristmas ?❤️?❤️?❤️ swipe for more ➡️

Congratulations to Chuck and Kasi!

Watch Chuck, his morning show co-hosts, and singer Michael Ray talk about his relationship below.