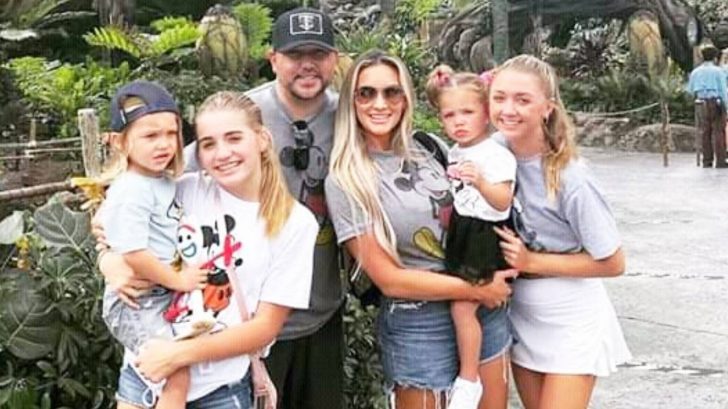 Over the weekend, Jason Aldean took his family, which includes his wife Brittany, their kids Memphis and Navy, and Jason’s teenage daughters Keeley and Kendyl, to Disney World in Florida.

Being together at a Disney park is magical, so like any father would, Aldean shared a photo of them family at the amusement park.

“There is Nothing like seeing ur kids faces when u walk in that place,” he captioned the photo of his smiling family.

Perfect day with my whole crew today @WaltDisneyWorld. There is nothing like seeing ur kids faces when u walk in that place.#waltdisneyworld pic.twitter.com/J9FRvi71tT

Fans quickly noticed that no one in the Aldean family was wearing a mask, which is now required at Disney World and people online took it upon themselves to call the country singer out.

One person even tweeted former Disney CEO Bob Iger, writing, “So masks are meant to stay on at all times except when seated for eating and drinking. This includes photos, so why was Jason Aldean & family allowed to take them off if there are NO EXCEPTIONS.”

@RobertIger so masks are meant to stay on at all times except when seated for eating and drinking. This includes photos, so why was Jason Aldean & family allowed to take them off if there are NO EXCEPTIONS. cant have one rule for 1 and another rule for others pic.twitter.com/KR2efwtNDX

See other responses below:

There’s nothing normal about vacationing during a pandemic lol don’t go if you can’t follow rules. The more people see these photos the more people disregard them and give cms a hard time. pic.twitter.com/EHkUKPtqAb

If only there was someone around to tell them to put their masks on ? pic.twitter.com/g23yCTh8mR

The pandemic isn't over just because you're over it. pic.twitter.com/uVsi7PmIVx

He got so much flack on the photo that he felt the need to respond to a comment on Instagram.

A woman commented, “Wtf are your masks? Everyone is required to wear them? WTH who do you think you are? I’ll never buy your music ever!!!”

Aldean responded quickly, saying, “Chill out lady. They are in our pocket. We took them off for 5 seconds to take the pic. Believe me, Disney didn’t give us a ‘free pass’ not to wear them. We had them on all day just like everybody else.”

Then he told her to “just enjoy the picture” and to “stop over analyzing.”

You can see a mask in the hand of Jason’s daughter Kendyl, who is at the left of the photo, holding Memphis. Despite coming to his family’s defense, Aldean has since deleted the photo from social media.