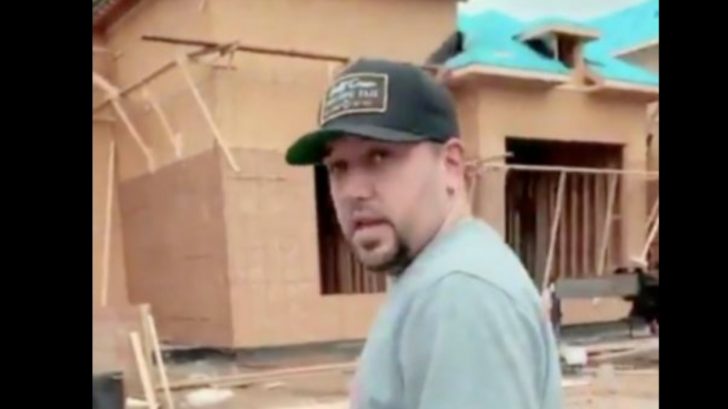 While they were patiently waiting the arrival of their second child together, a daughter named Navy Rome, Brittany and Jason Aldean are making big changes. Shortly after announcing they were expecting again, Brittany revealed on Instagram that they were in the process of building their “dream home.”

“Looking at the land it’s hard not to envision a place where our babies will run, laugh and play with each other for so many years to come…” she wrote. “I can hardly wait to hear those little feet running down the halls.”

And so our new journey begins… we’ve decided to build our dream home in Tennessee☁️ Looking at the land it’s hard not to envision a place where our babies will run, laugh and play with each other for so many years to come… I can hardly wait to hear those little feet running down the halls💙

In the time since, she has provided fans with updates on how the building process is going.

In January, she and Jason visited the house again and she took us on a mini-tour!

Since they are able to design their new home themselves, there was one thing Jason definitely wanted to have – a bowling alley! Apparently the “Drowns The Whiskey” singer enjoys the sport so much he had a bowling alley put in their old house in 2017, and now, their dream home!

If you want to know what their personal bowling alley looked like in their old house, look no further! Brittany happily shared a photo of it in December 2018.

We had this Man Cave/Bowling Alley built on our land last year… seem crazy? Maybe! But Jase works his tail off and it makes him happy so who cares!😛☺️ @traceconstruction

She showed off where the new bowling alley is going to be on her Instagram story.

Has anyone else ever built a home and checked in entirely too often, as if there are major changes daily😂 We are just so excited… every little bit of progress makes us giddy🙈

Brittany has showed off photos of Navy’s new nursery, but also revealed that they are in the process of moving – but their new house isn’t ready, so fans have been wondering where they are moving to.

New episode on Discovery “I’m pregnant and moving” 🏠➡️🏡 ….. I also want to do an episode of “I wish I could bitch slap every social media troll” after reading these comments😂

Their dream home will not be ready for another year, and they already sold their old house. They will be living in a temporary house until their dream home is ready next year! Super fans will remember that Brittany had a gorgeous fish tank built for Jason, with the help from the guys from the TV show Tanked, and many of them wondered what was going to happen with it.

Unfortunately, the Aldeans will not be bringing the fish tank with them, instead leaving it for the new owners, who will take good care of the fishies that reside in the tank.

I was actually wondering about this thing. Ever moved a fish tank? They're a huge PITA. pic.twitter.com/AiifGyzdjc

Tuesday night (Jan. 15) the family spent their last night in the house they called home for three years. Brittany wrote an emotional post on social media expressing her feelings over saying goodbye.

Tonight we said goodbye to our home for the past three years. The home where we brought our first baby, where the dog that I loved more than words spent his last years, where I had my first baby shower, numerous parties just because and built a fish tank that housed so many of my ‘angels’ (as I call them). I know there’s so much that the future holds in other places, but to me, this house was so special… and always will be💙

We’re sure the next year or so will fly by, especially with the arrival of Baby Navy! They will be living in their dream home in no time – and we can’t wait to see it!