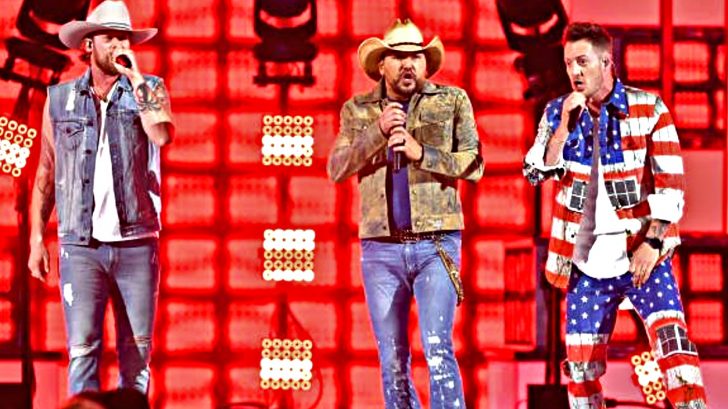 Decked out in what could only be described as the American version of a Canadian tuxedo, one half of country music duo Florida Georgia Line really took “redneck” to the next level – and Jason Aldean was there for it, too!

No stranger to a collaboration with Florida Georgia Line, this country music superstar (and major ACM winner) joined them for a tune that showed up on their most recent album Can’t Say I Ain’t Country – and it’s got a deep-rooted country theme, with a modern country tune.

Jason Aldean, who already was announced as the ACM‘s pick for their rare award ‘Artist Of The Decade’ is also up for a few other awards this year. Nominated for Entertainer Of The Year and Music Event Of The Year, the 54th Annual ACM Awards will mark Aldean’s 14th year as a nominee.

Together, the duo and country superstar took to the stage in Las Vegas for a boot-stomping performance of their hot new collaboration “Can’t Hide Red” – which is a song dedicated to redneck roots.

In an interview with CMT, Aldean opened up about the song and said that even after working with the duo on two of his own songs, the process of crafting this one was “a whole different way of recording music.”

This one-of-a-kind performance was filled with twang, a good beat, and some sick harmonies. If you’re a fan of either Jason Aldean’s music or Florida Georgia Line’s – there’s no question that you’ll love this!

Check out a clip from their wild ACM Awards show below and let us know what you think in the comments.