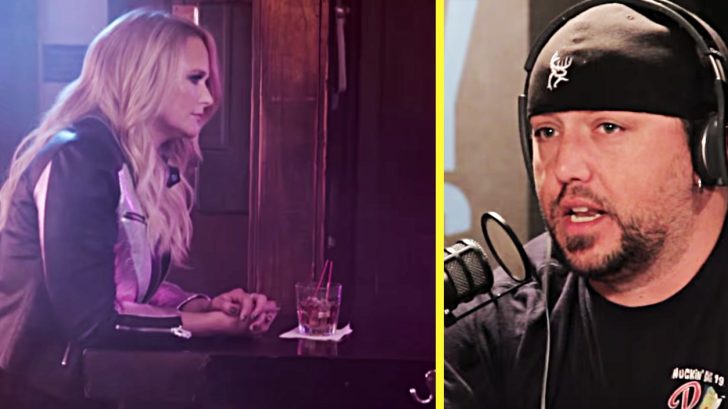 The country music star is opening up about his afternoon spent drinking copious amounts of whiskey alongside one of the industry’s most successful female artists – and makes note of their pool-playing skills.

Heartbroken Miranda Lambert Tries To Forget Her Ex With Jason Aldean
Some ex's are harder to forget than you think… https://t.co/R41Nqzh28B pic.twitter.com/rNGC1yTNfY

In a Nashville dive bar that Jason Aldean had previously done a photo shoot for his album in, he and his crew along with Miranda Lambert hung around for an entire afternoon, drinking, singing, and chalking their pool cues.

“Miranda and I hit the scene together here in Nashville and we were new artists at the same time, rose up through the ranks together. We’re kind of the face of country music right now; we sure weren’t when we started” – @Jason_Aldean #Drownsthe? https://t.co/qwDEiRoBxP pic.twitter.com/ZWJ121h2mv

Sitting on stage next to CMT’s Cody Alan, Aldean opens up about his duet with Lambert, “Drowns The Whiskey” and the day they shot the music video.

Apparently, Lambert had told Alan that her pool game wasn’t that strong, but confessed that she drank way more whiskey than Aldean did.

“That day, we were like, ‘Hey if we’re gonna be singing a song about whiskey, I don’t want to be sitting here drinking sweet tea. Somebody grab some Jack Daniels,’” Aldean admitted with a chuckle. “I’ve always said that Miranda can hang with any guy I know drinking.”

True to his word, in the behind the scenes video of the day they filmed, Aldean and Lambert have glasses of whiskey neat in-hand for most of the shots.

While they both can drink, Aldean confessed that neither is very good at shooting pool.

“She said y’all played pool that day,” Cody Alan led into the conversation with Aldean.

It looks like the video shoot was a lot of fun and the end result definitely was worth an afternoon playing pool and drinking whiskey!

Check out the behind-the-scenes video and the full music video below.

Live from Jason Aldean’s Kitchen and Rooftop Bar in Nashville. #CMTHeadlinersHere to watch? Friendly tip, Jason hits the stage at the 2:01 timestamp. Skip ahead. 🙂

Posted by CMT Radio with Cody Alan on Thursday, August 9, 2018