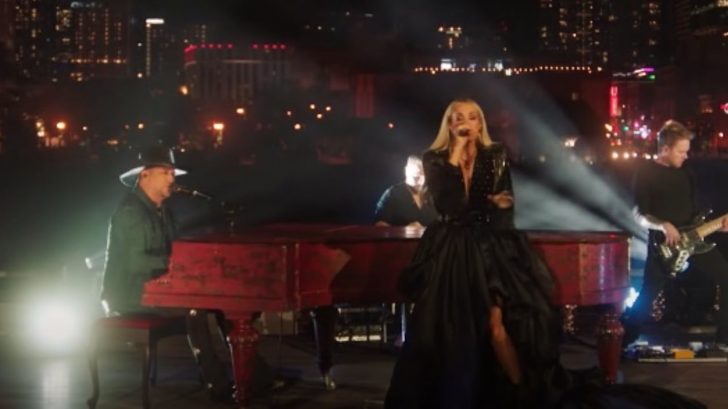 During the CMA Awards on November 10, 2021, Carrie Underwood and Jason Aldean delivered their first live, televised performance of their #1 duet, “If I Didn’t Love You.” Many fans referred to their performance as a highlight of the ceremony.

Even though the CMA Awards marked the first time Aldean and Underwood sang “If I Didn’t Love You” together live, it wasn’t Aldean’s first time singing it live.

Aldean started performing “If I Didn’t Love You” on tour shortly after the song was released. Since Underwood couldn’t be with him, he had to perform the duet without her.

But he still found a way to involve her in the performance. He played footage of her singing “If I Didn’t Love You” on screens that surrounded the stage, while he sang and played the piano.

Aldean brought the piano back for a new live performance of “If I Didn’t Love You” during the 2021 American Music Awards. And just like at the CMA Awards the previous week, Underwood was able to sing with Aldean in person.

The pair delivered their AMA duet in the middle of downtown Nashville at night. The glowing lights of the city served as a stunning backdrop for their performance.

“I never get tired of hearing this song!! Carrie and Jason did amazing on it as always!!” one YouTube user commented on the performance video Aldean shared on his official channel.

Another YouTube user commented, “Mind blowing singing going on right there. I couldn’t believe my eyes…That city, the bridge, the orchestra, that beautiful piano…”

“Damn this sounds just as good as the record!!! Live or not, Y’all kill it every time,” wrote another fan.

You can see what all the fuss is about when you watch Aldean and Underwood’s AMA duet of “If I Didn’t Love You” in the video below. It’s no wonder why this song became a #1 hit!