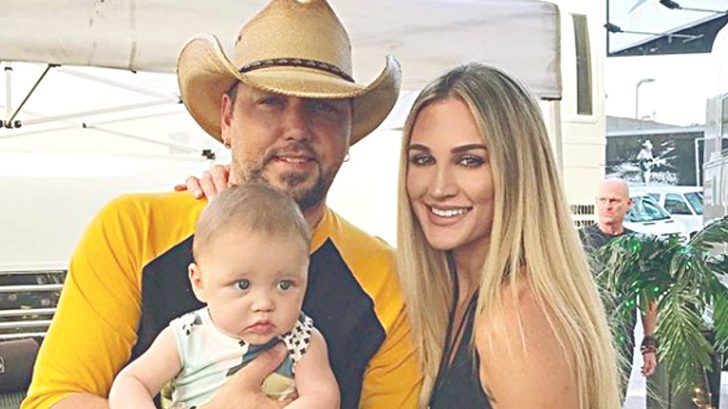 One month after sharing the big news that they are expecting another baby, Jason and Brittany Aldean have shared the baby’s gender via an Instagram video, and we couldn’t be more excited!

The couple shared news of the new baby in early July with matching Instagram posts that showed their then-7-month-old son Memphis in a onesie that reads “Big Brother.” Brittany captioned the photo saying, “Here we go again!” with baby and heart emojis. Aldean captioned his version with, “Sup everybody……. guess who is gonna be a BIG brother!”

In a new video posted by the expectant parents on Sunday (August 12), Jason, Brittany, their 8-month old son Memphis, and Jason’s two daughters from his previous marriage, Kendyl (11) and Keely (15), are in the family’s backyard for the big reveal. Brittany asks each of the kids what they expect the news to be. Both Kendyl and Keely are confident that the baby will be a girl. “I’m gonna say girl, because you’ve been a little sicker with this one than Memphis,” Keely said.

And….Keely and Kendyl were right! It’s a girl!

Following the birth of their son, Memphis, in December 2017, Jason, 41, and Brittany, 31, opened up about their struggle to conceive after an endometriosis diagnosis and in vitro fertilization treatments.

“The IVF was probably harder than the actual pregnancy, for me, because it was just such a roller coaster and so difficult,” Brittany told PEOPLE. “It’s such high highs and such low lows, and no one really knows that you’re going through it all so you have to just put on a game face and pretend that you’re not giving yourself shots in your stomach every day, all day.”

Despite the struggles, the couple were excited to expand their family further and were anxious to do it sooner rather than later.

Congratulations to the Aldeans! Watch their adorable gender reveal in the video below!