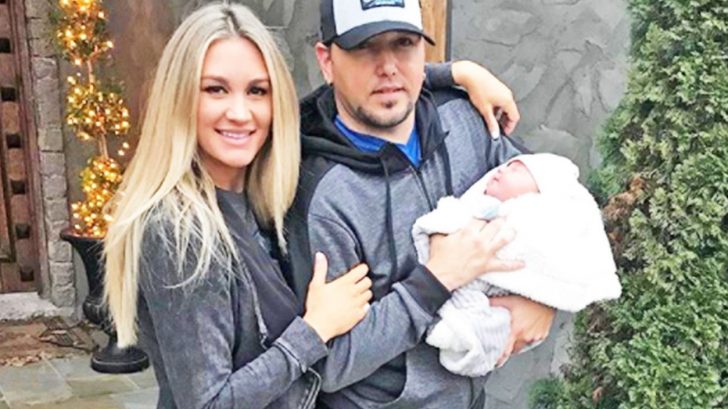 A little boy by the name of Memphis Williams may only be seven weeks old, but he already could win a Jason Aldean look-alike contest! That also may be because Memphis is Jason Aldean’s newborn son.

Little Memphis was born on December 1, 2016 weighing in at 9lbs. and 5 oz, with Jason’s wife Brittany regarding the day as “hands down the happiest” day of her life. Brittany has been sharing extremely cute photos of their life with a newborn, and because her posts on Instagram make it seem like their lives are so glamorous, Jason wanted to make a point in saying that it absolutely is not!

This is for daddy??? #imasweetwife

“[Brittany] is always posting pics of Memphis that are good, but this is actually the stuff she doesn’t post. #reallife,” Jason captioned a photo of a crying Memphis.

@brittanyaldean is always posting pics of Memphis that are good, But this is actually the stuff she doesnt post. #reallife #hangry

Even before Memphis was born, Jason, whose real last name is Williams, was already calling him his “twin.” Thanks to a 3-D ultrasound photo, you could already see the resemblance! Take a look below.

In some of Brittany’s posts, you can tell that Memphis looks a lot like his dad, but in the most recent photo Jason shared, there is, without a doubt – no questions asked, an uncanny resemblance between the seven-week-old and his proud papa. The only difference between them is Memphis’ deep blue eyes to Jason’s green.

Check out the photo below to see for yourself.

They share so many of the same features – nose, cheeks, lips, and so much more. Guess Memphis will always know what he will look like when he grows up!