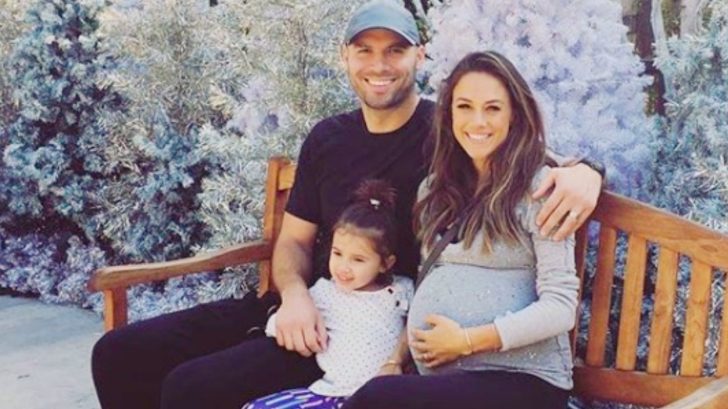 According to People, the couple’s baby boy was born in Los Angeles early Thursday morning, at 7:53 AM. He weighed in at seven pounds, 12 ounces, and measured 20 and a half inches.

We are ready to be a family of 4! Any tips for the new transition besides wine of course?!?!? [email protected]

The Long Road To Baby #2

Jana and Mike share a daughter, Jolie Rae, who was born in January 2016. The couple separated for a short time a few months after Jolie’s birth, but eventually reconciled.

After getting back together, Jana and Mike started the plans to expand their family. But the road was not an easy one, as Jana had to undergo numerous IVF treatments and a number of heartbreaking losses.

Finally, after all the heartache, Jana announced in June that she and Mike were expecting their second child.

#Ad Surprise! We have a rainbow baby on the way & couldn’t be more excited! Jolie is going to be a big sister & we’re becoming a family of 4! Thanks @avawomen for helping us get pregnant by telling me my 5 most fertile days! #AvaPartner Pregnancy takes a village – Also thanks Bonjesta® (doxylamine succinate/pyridoxine HCl) 4 helping me manage my #morningsickness after diet & lifestyle changes didn’t work. It’s a safe & effective new formulation of the drug combination I took before that’s made to work faster & longer. Most common side effect is drowsiness. For US residents only INDICATION Bonjesta® is a prescription medicine to treat nausea & vomiting of pregnancy (NVP) in women who haven’t improved with change in diet/other non-medicine treatments. Bonjesta® hasn’t been studied in children under 18. LIMITATIONS OF USE It isn’t known if Bonjesta® is safe & effective in women with severe NVP (hyperemesis gravidarum). Women with this condition may need to be hospitalized. SELECT SAFETY INFORMATION Don’t take Bonjesta® if you’re allergic to doxylamine succinate, other ethanolamine derivative antihistamines, pyridoxine HCl or any ingredients in Bonjesta®. See Patient Information leaflet for complete list of ingredients. Don’t take Bonjesta® in combination with medicines called MAOIs, as these medicines can intensify & prolong adverse central nervous system (CNS) effects of Bonjesta®. Ask your healthcare provider/pharmacist if you aren’t sure if you take an MAOI. The most common side effect of Bonjesta® is drowsiness. Don’t drive, operate heavy machinery or do other activities that need your full attention unless your healthcare provider says you can. Don’t drink alcohol, or take other CNS depressants such as cough & cold medicines, certain pain medicines & medicines that help you sleep while taking Bonjesta®. Severe drowsiness can happen or become worse causing falls/accidents. Bonjesta® may result in false positive urine drug screening for methadone, opiates and PCP. More safety information on bonjesta.com. Duchesnay USA encourages you to report negative side effects of prescription drugs to the FDA. Visit www.fda.gov/medwatch or call 1-800-FDA-1088.

Not long afterward, Jana shared the happy news that she was expecting a boy. From that point on, her social media accounts were filled with photos of her ever-growing baby bump as she anxiously anticipated the little man’s arrival.

The last time Jana posted on social media was just the day before her son’s birth. Sharing a picture of her family of three, she expressed her shock over how there would soon be a fourth family member in their future photos.

No denying there is a giant baby in this photo! Family of 3 about to be 4!!!! #holysh*t

He’s Here – And His First Photo Is So Sweet

The next photo Jana shared was the one announcing her son’s birth. In the caption, she expressed her thankfulness to all who have supported her and Mike on their journey to expand their family.

“Our hearts are so full,” she wrote. “Thank you to all of our friends and family..and all of you who have supported Mike and I, and our growing family. We are so blessed…”

Also in the caption, Jana revealed the name of her new bundle of joy. Like Jolie, the newest member of the Kramer-Caussin brood has a first initial that matches that of his mama’s.

“Welcome to the world, Jace Joseph Caussin,” Jana wrote alongside the precious image of her and Mike snuggling their new baby boy.

Welcome to the world, Jace Joseph Caussin. Our hearts are so full. Thank you to all of our friends and family..and all of you who have supported Mike and I, and our growing family. We are so blessed, and a huge thank you to @avawomen for helping us grow our family. #rainbowbaby #blessed

A huge congratulations to Jana, Mike, and big sister Jolie on their new addition! We can tell that baby Jace is going to be spoiled with lots of love.