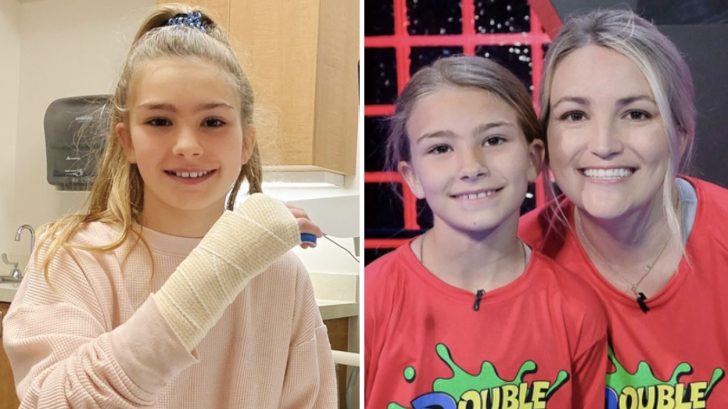 Jamie Lynn Spears is the younger sister of pop star Britney Spears, who has made a career on her own in the world of country music. In 2013, she released her debut single “How Could I Want More.” She’s had some success as a country songwriter, penning Jana Kramer’s Top 5 song “I Got The Boy.”

No make up, family dinners, after church on a perfect weather kinda day is my version of vacation. ?: @jamiewatson985

On Valentine’s Day, Jamie Lynn Spears posted about the eventful day she had with her oldest daughter, Maddie.

Sharing a photo of Maddie in a bandage wrapped splint on her right wrist on a hospital bed, she wrote, “This one keeps us on our toes, no matter what the occasion is… little accident at recess today, but nothing too serious.”

This one keeps us on our toes, no matter what the occasion is… little accident at recess today, but nothing too serious. Thanks to everyone who helped us get this checked on quick, and everyone who text to check in! *it is much easier to just post this, then respond to every text, because I’ll forget to respond, and then I’m being rude. #HappyValentinesDay

She didn’t explain what the actual injury was, but on her Instagram stories on Monday (Feb 17), she revealed that the doctor’s diagnosis was a buckle fracture, which will take 4-6 weeks to heal.

A buckle fracture, according to KidsHealth.org, is when “one side of a bone bends, raising a little buckle, without breaking the other side of the bone.” It often happens to children around 10 years old or younger because their bones are softer and a bit more flexible than adult bones.

We’re glad this is a relatively quick healing process for the young girl, who has already been through one miracle in her short lifetime.

On February 5th three years ago, young Maddie was hospitalized after an ATV accident which caused her to flip into a pond.

According to a police report released to PEOPLE, the then-eight-year-old was instantly submerged and “within seconds the child’s mother, stepfather and other family members reached the pond, dove in and attempted to rescue the child to no avail. The child was trapped and secured by the seatbelt and the ATV’s safety netting. Within two minutes, Acadian Ambulance Services arrived and assisted in freeing the child from the cold waters.”

Maddie was airlifted to a nearby hospital where she was admitted in critical condition. In what can only be called a miracle, the child was released from the hospital just 5 days after the accident.

See what Jamie Lynn had to say about the recent anniversary of the scary incident below.

3 years ago today, Super Bowl Sunday fell on February 5th, and I’ll never forget that, because it was the day my whole world stopped. It started like most Sunday’s, going to church, visiting family, to suddenly trying to save my daughters life, to them taking her away, to us believing we had lost her forever, and it literally felt like the world stood still around me. I have never spoken fully in detail about that day, and the events that followed, but what I will share is that God blessed us with a true miracle. Maddie not only stayed here with us, but she made a full recovery. I know so many of you prayed so hard for us, so I will never let this day pass without thanking each of you for every single prayer you said for us, and I hope you all know we do not take this huge blessing we were given for granted, because most are not as fortunate, and we are fully aware of that horrible and unfair fact. I am filled with gratitude today, and everyday, even on the bad days, because even those days are a gift, that so many others would give anything for just to have their loved ones back. Let’s all be thankful for the tiny miracles in our lives everyday, that we may take for granted, because it could all change in a second. Thank y’all for always being there for me and my family, we appreciate you and love you so much. #MiracleAnniversary