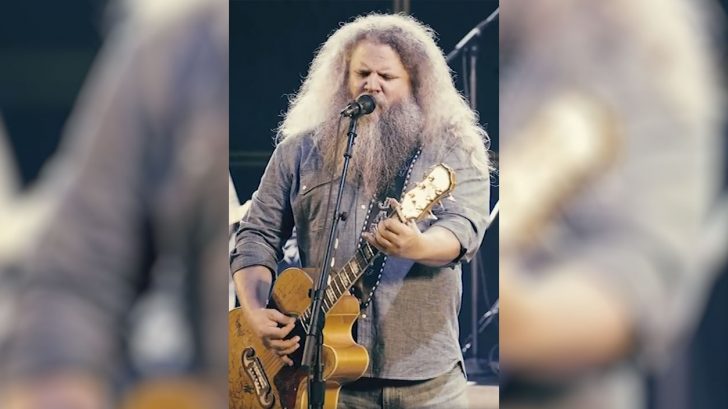 Jamey Johnson provided a beautiful rendition of the National Anthem before the first race of the Pocono Raceway doubleheader which features five races in four days. The four-day event started on Thursday, June 25, 2020 and ended Sunday, June 28, 2020.

He began with picking his guitar and his raspy vocals for the first stanza followed by powerful harmonies from the rest of his band. About halfway through a harmonica and steel guitar were added giving the anthem a classic Jamey Johnson sound.

Jamey Johnson provided a beautiful rendition of the national anthem before the first race of the Pocono Raceway doubleheader.

Johnson began his career back in the early 2000’s when he moved to Nashville as a songwriter. With a long list of songs written for artists such as Willie Nelson, Merle Haggard, Trace Adkins, George Strait, James Otto, Joe Nichols, and Jessie James Decker he caught the attention of record labels. In 2005, he signed with BNA Records and began his solo career. A US Marine veteran, Johnson quickly gained a huge following of Americans that appreciated his patriotism and service to his country. His first single, entitled “The Dollar,” was released that year and peaked at No. 14 on the country charts. His second single, “Rebelicious,” failed to enter the charts and Johnson was dropped from BNA.

After being dropped from the label, Johnson refocused on his songwriting which led to him writing songs like George Strait’s “Give It Away” and Trace Adkins “Ladies Love Country Boys.” After his success with writing, he released his album That Lonesome Song in 2008, which captured the attention of Mercury Nashville Records, who signed him. His first single for the label, “In Color” was released the same year and became one of his biggest hits.

After a dispute with his new record label, Johnson went and started his own where he continued to write and record his music.

Johnson released his most recent studio album titled Living for a Song: A Tribute to Hank Cochran on October 6, 2012. The album features artists such as Alison Krauss, Merle Haggard, Vince Gill, and many others.

Watch the video below for an in-depth look at the album and its many collaborators.