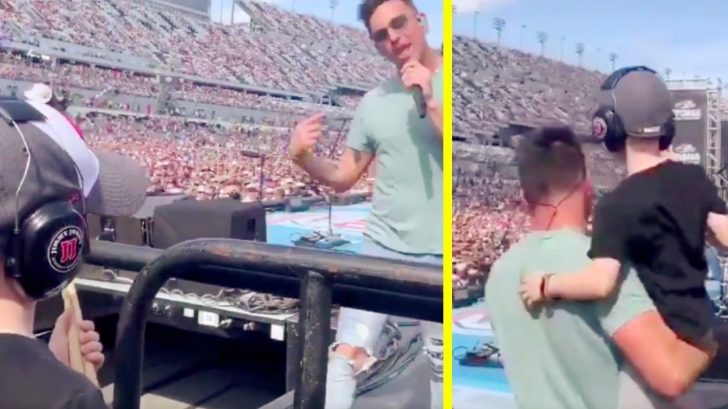 Some of the greatest moments that emerge from country concerts are when the artists work with their fans to create a personal experience. It has become more of the norm for singers to welcome fans on stage with them, whether it’s just to chat or to have them perform.

Keith Urban is famous for doing this, as he often invites his fans to come up on stage at his concerts. He’s managed to find some talented people in the process, and gives them a chance to perform in front of thousands of fans.

That’s the same opportunity that Jake Owen recently gave to one young fan in the audience at his concert before the Daytona 500. And that young fan just so happens to be the son of a NASCAR driver!

Harvick Family Turns Out At Daytona

2014 NASCAR Sprint Cup Series champion Kevin Harvick and his wife, DeLana, have two children together. Their son, Keelan, was born in 2012, while their daughter, Piper, was born in 2017.

It seems that the Harvicks made the 2019 Daytona 500 a family affair, as DeLana and the kids all turned out to support Kevin.

But it was young Keelan who became one of the day’s biggest stars during Jake’s concert prior to the race. The little guy was standing off to the side of the stage, drumsticks in hand, and Jake decided to lift him onto the stage so he could play along with his drummer.

Jake carried Keelan all the way over to the drum set, and the boy instantly started jamming along to his hit song “Barefoot Blue Jean Night.”

As you would expect, the crowd was thrilled to see a NASCAR driver’s son appear onstage next to one of their favorite country stars. We think it’s safe to say that he stole the show!

Keelan’s mama was also quite excited, and took to Twitter to share a short video of his drumming debut.

“When you get to play drums on stage before the Daytona 500!” DeLana captioned the video. She also took the time to thank Jake for making Keelan’s day so special. We’re sure he felt like a superstar!

You can watch the adorable video of Keelan’s Daytona jam below.

Be on the lookout for this little fella in the future. He may one day find himself drumming with the best country stars in the business!