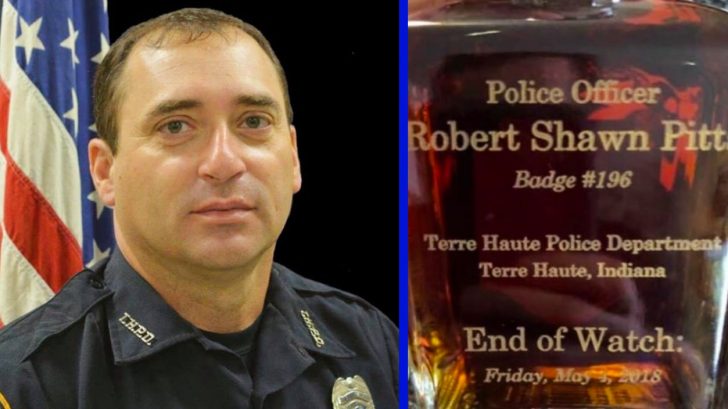 In 2018, Officer Robert Pitts lost his life in the line of duty. He was a 16-year member of the Terra Haute Police Department in Indiana, and previously served six years with the Sullivan Police Department.

#livepd This it is the final call to Officer Pitts. R.I.P. Officer Robert Pitts – E.O.W. May 4, 2018 pic.twitter.com/MMXAKrHHNv

To commemorate Officer Pitts, Jack Daniel’s designed a special whiskey bottle that was then given to his brother, Greg. Greg’s story and photos of the bottle memorializing his brother were shared by the Indiana Going Blue Facebook page.

The post has already been shared hundreds of times since it was posted on Tuesday (August 20). And once you see how beautiful this bottle is, you’ll understand why.

Greg said that a total of eight men worked to design the bottle honoring his brother.

“For a company such as this to do something like this. I have no words,” his message read.

The bottle made in honor of Officer Pitts lists his name, badge number, police department name, and the date of his passing, or “end of watch.”

Shared from Officer Rob Pitts’ brother:I’ve kept this to myself, other than family, for a while now. Jack Daniels has…

“It’s another way that I know Rob will never be forgotten,” Greg said about the special bottle. “On behalf of me and my family, thank you!”

It appears that Jack Daniel’s also gifted two other bottles to Greg, both commemorating the 30th National Police Week. The designs on those bottles are also impressive.

While the bottle remembering Officer Pitts may have the most simplistic design out of the three, we’re sure it means the most to his brother.

Our hearts go out to all of Officer Pitts’ family and loved ones as they continue to mourn their loss. May he rest in peace.