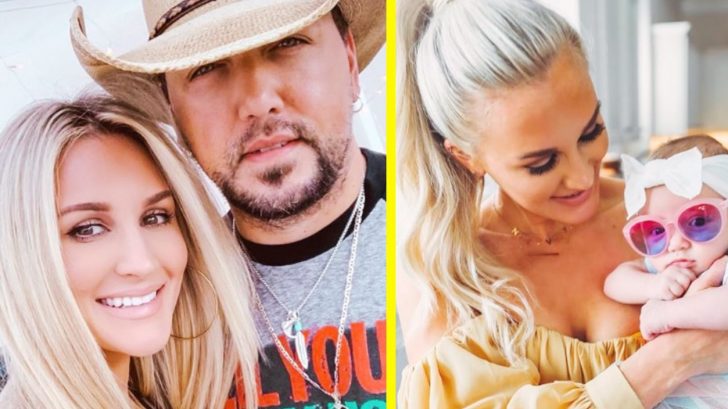 There’s no denying that Jason and Brittany Aldean‘s son Memphis is Jason’s mini-me. That’s a statement that thousands of the couple’s fans agree with, as every photo of the 18-month-old draws comments stating how he looks just like his daddy.

So when the couple’s daughter, Navy Rome, was born this year, Brittany was not-so-secretly hoping that her baby girl would take after her. Though much to her dismay, it initially seemed like Navy was also going to take after her father.

This is something that Brittany talked about on social media, asking fans to “throw [her] a bone” and say that Navy looks like her. She joked that Jason told her, “we can’t keep having babies until one looks like you” and her response was “Hehehehe, yes we caaaaaan.”

That was back in February, and baby Navy was a newborn. Now four months old, the little cutie is growing and changing so fast, and fans are finally seeing a bit more of Brittany in her looks.

Every time Brittany has shared a new photo of Navy, more and more people have been commenting that she looks like she’s starting to take after her mama. These comments have surely fueled Brittany’s hope that she’ll one day have a mini-me of her own.

And the latest photo that Brittany shared of her sweet baby girl shows their similarities more than any other so far. This is something that Brittany embraced through Navy’s adorable outfit, which was a black swimsuit with the words “Got it from my mama” printed on the front.

Clearly wanting to believe the words that her little beach bum was sporting on her swimsuit, Brittany wrote in the photo’s caption, “U tell em, girlfriend.”

Only time will tell if Navy will continue to grow up to look more like her mama. Memphis definitely looks more like Jason each day, so maybe the passage of time will result in Navy looking even more like Brittany.

What do y’all think? Is Navy Brittany’s mini-me or Jason’s? Or do you think she looks a little bit like both of them? We’re curious to hear your thoughts!