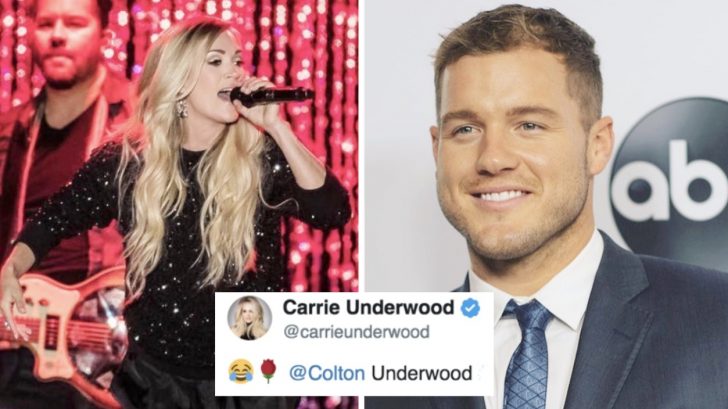 We were first introduced to Colton Underwood in 2018 when he was a contestant on The Bachelorette. He became a fan favorite and also appeared on the spin-off show Bachelor in Paradise. After he was unsuccessful on both shows, he was announced as The Bachelor in the fall of 2018, and his season began airing January 7, 2019.

Colton’s season of The Bachelor has been classified as the most emotional and dramatic in franchise history, and for good reason. He is the first Bachelor ever to go into the finale episode with no women remaining.

Things got so bad that he a nine-foot fence to escape filming for a while and briefly quit the show.

Everyone, and we mean everyone, is talking about the fence jump, but there is something else people have been talking about, even way before he became The Bachelor: Is he related to Carrie Underwood?

Thanks to her response to a Bachelor video, we now know the truth.

The Bachelor tweeted a video with the caption, “[The Bachelor finale] may leave you ugly crying, but that’s okay because you can’t cry pretty” and included a montage of women – and Colton – crying throughout the season to the tune of “Cry Pretty.”

#TheBachelorFinale may leave you ugly crying, but that's okay because you can't cry pretty. pic.twitter.com/JXeV7nqsQw

At the end of the video, it promoted Carrie’s upcoming Cry Pretty Tour and she responded to the tweet by saying she had “#NoRelation” to Colton.

Colton himself tweeted Carrie back, using some of her own “Before He Cheats” lyrics.

At moments I wanted to take Louisville slugger to both headlights… even slash a hole in all four tires… but I decided to jump the fence instead. https://t.co/ieL2DAbmMu

Well, there you have it, folks. Carrie Underwood and Colton Underwood are not related, despite many fans thinking they are distant cousins, or even siblings!

Even though they’re not related, maybe they can team up one day for a duet, seeing as Colton has a song with boy band O-Town called “Hello World,” which was created for his Legacy Foundation benefitting kids with Cystic Fibrosis! Listen to it below.