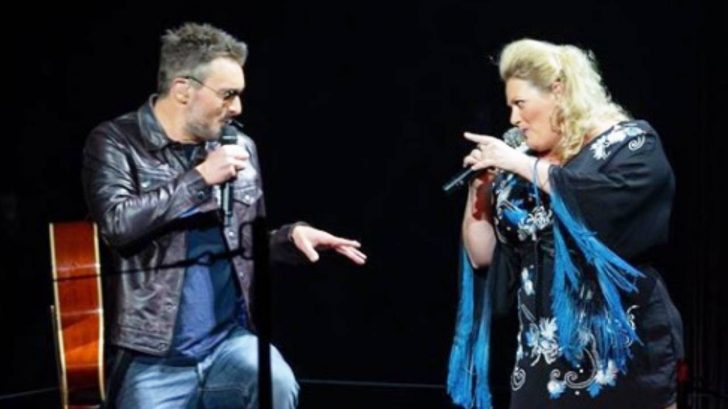 At the 55th Annual ACM Awards, Eric Church’s performance was a highlight of the night. He sang his latest single, “Stick It In Your Country Song.”

Written by Jeffrey Steele and Davis Naish, “Stick That In Your Country Song” will be included on Church’s upcoming album and touches on real-world issues including soldiers coming back from war, overworked and underpaid school teachers, and more.

At the ACM Awards on September 16, 2020, Church began his performance strumming his guitar on a dark Grand Ole Opry stage. An image of Johnny Cash lit up behind him and The Man In Black’s iconic voice rang out in the historic venue reciting “Ragged Old Flag.”

A couple minutes later, Church began singing “Stick That In Your Country Song” with the help of his talented band and his backup singer, who has become somewhat of a star of her own at his live shows. During and after his performance, people were raving online how they’d just witnessed the best song of the night, but also pointed out how talented Church’s backup singer was.

Watch Eric’s performance of “Ragged Old Flag” by Johnny Cash and “Stick That In Your Country Song” live from the 55th @acmawards. #ACMawards

She was able to really showcase her incredible and soulful voice towards the end of their six-minute set. This left many people wondering…who is she?

Well, her name is Joanna Cotten and she’s been singing with Church for many years. If you’ve seen him in concert before, she and the “Chief” often sing duets together and she gets the spotlight for a couple solo songs as well.

She previously had her own record deal as a solo artist and recorded over 20 songs before leaving the label in 2007. Then, Cotten hopped on board with Church and has been singing with him ever since. She is so well-loved by his fans that she has her own merchandise out on the road!

Although Cotten is a classically trained vocalist (she attended Julliard), she has always been a country girl at heart. She was raised in Memphis, Tennessee and admitted that during a rehearsal when her voice teacher was telling her about a church hymn, she brought her now-signature country sass.

“[The teacher] said, ‘Well, you know, Jesus came down from heaven,’ to try to teach me the meaning of the song,” Cotten recalled. “And I said, ‘Yeah, and the devil went down to Georgia!’ I think at that point I was quite busted that my mom was letting me sing other things!”

She even left Julliard and moved to Nashville to pursue her country music dreams.

Not only can she sing, she’s a songwriter as well, but put that on hold when her touring schedule with Church got hectic. But when things slow down, she always enjoys writing again.

“Just being on the road and adjusting to that life — it sort of drained me of my creativity, because I would just be tired when I got home,” she said during the summer of 2019. “I’m hoping this break I can get back in there. And, here and there, I have done some things that people haven’t heard.”

At every live show, Church always performs a cover song that relates to the city they are in, forcing Cotten to sometimes learn a song the day of the performance! Despite that, she and Church always kill it.

Check out a video of Cotten and Church singing The Beatles’ “Come Together” in 2019 below.