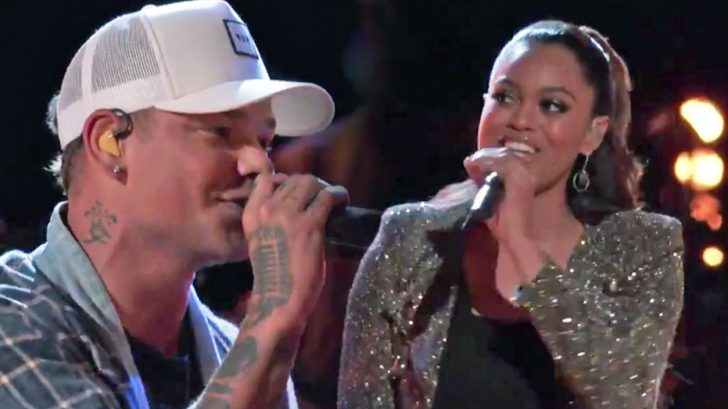 Well, that was hot!

Country singer Kane Brown stopped by The Voice Season 14 finale to perform his hit song “What Ifs” with finalist Spensha Baker. Representing Team Blake, Baker has made it clear she wants to pursue country music, so teaming up with one of the hottest male country singers in the game right now was a no-brainer!

Brown released “What Ifs” as the third single off his debut self-titled album in February 2017 and it featured Lauren Alaina. The single debuted at number 36 on the Billboard Hot Country Songs Chart, but didn’t stay there long. It catapulted to number one, and it ended the record breaking 34-week long streak of Sam Hunt’s “Body Like A Backroad” holding the top spot.

Even though the single is over a year old, people still can’t get enough. Brown and Alaina just about broke the Internet with their up close and personal performance at the ACM Awards in April 2018.

Brown and Baker brought that same spark to The Voice stage and set the Internet ablaze!

Check out some of the reactions below.

@kanebrown u did a great performance with @spenshabaker @NBCTheVoice tonight #VoiceFinale ??????

@NBCTheVoice okay that chemistry between @spenshabaker and @kanebrown ???? amazing performance!!

And watch their duet below! Do you think Spensha has a chance to win the whole competition? Let us know!