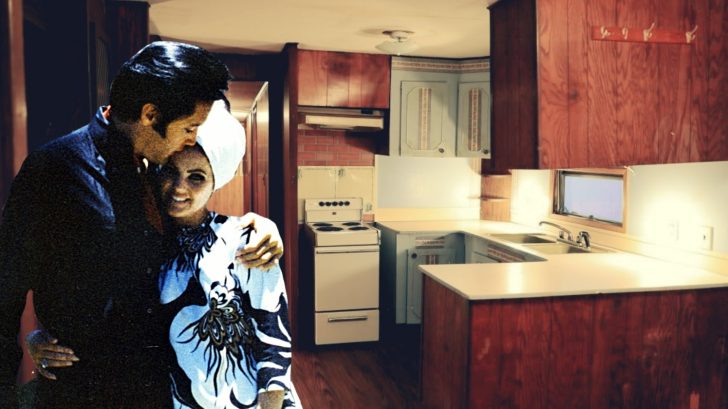 Take a peek inside Elvis and Priscilla Presley’s custom home!

In 1960 Elvis purchased a 163-acre ranch, he later named “Circle G Ranch,” as a getaway for him and Priscilla, that wasn’t too far from Graceland.

When Priscilla and Elvis were married in 1967, they spent a portion of their honeymoon in the ranch house.

Elvis really enjoyed having his friends around, known as the “Memphis Mafia,” so he ordered 8 trailers for them and had homes placed on concrete slabs near the lake on the ranch.

However, the accommodations for his crew were placed far from the ranch house, where he and Priscilla lived. So Elvis ordered the custom trailer for himself and his wife to be able to spend more time with the “Memphis Mafia.”

According to the auctioneer, the trailer was where Elvis shared some of his happiest memories and may have been the place they conceived their daughter Lisa Marie!

The 60′ Delta mobile home features two bedrooms and a bathroom, decorated to “The King’s” style and preference.

After being fully renovated in 2018, the iconic piece of Rock n’ Roll history went to auction and was sold to longtime Presley fan and memorabilia collector, Max Wiggins of Kemah, Texas. Included in the trailer’s sale was the original 1967 bill of sale, signed by Elvis himself.

Get a glimpse inside Elvis’s custom trailer below.