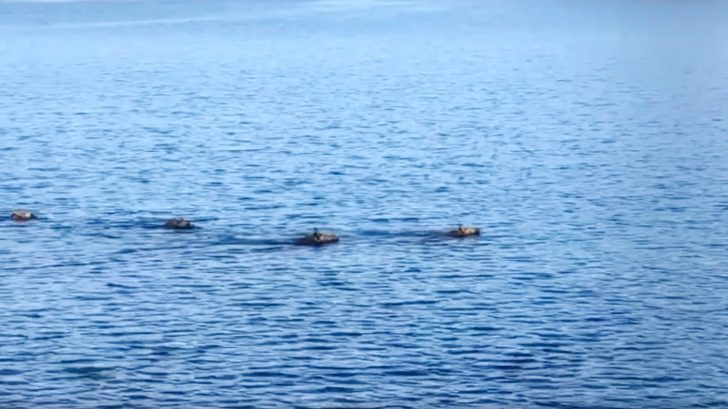 One lucky hiker caught a glimpse of something most people think might never happen – a whole family of wild hogs trekking across a chilly mountain lake!

Hiker Mark Walker was shared his experience in a Facebook group called Hiking the Smokies. He was hiking along the edge of Chilhowee Lake near Abrams Creek, just outside of Knoxville, Tennessee, when he saw a whole family of wild hogs swimming across the 1747-acre reservoir.

“This in case y’all think that wild boar cannot swim,” says Mark Walker in his video. “It’s insane! They swam across the entire lake.”

The nearly 60-second clip shows what appears to be four or five hogs paddling their way across the lake’s entire stretch of ice-cold water and coming out on a rocky part of the shore before bolting up the hill and out of sight.

The Tennessee Wildlife Resources Agency (TWRA) explains that wild hogs can have a devastating impact on folks in the state and cause a great deal of damage to property. In a 2015 survey, they state that wild hogs caused more than $28.31 million in damages and control costs.

“The damage they cause has become more common and widespread as during the last fifteen years as they have gone from being present in 15 counties in Tennessee to being present in nearly 80 of a total of 95 counties,” they write on their website. “In 1999, TWRA made an attempt to control the expansion of the wild hog population by opening a statewide wild hog season with no bag limit. Unfortunately, it was during this period of unlimited hunting that the wild hog population expanded the most. Disjointed populations of hogs began to occur in areas of Tennessee where they had never existed before as the result of illegal stocking by individuals whose goal was to establish local hunting opportunities.”

While it’s clear that the wild hog population does carry a negative impact, this video is proof they are surprising creatures even today!

Check out the full clip below.