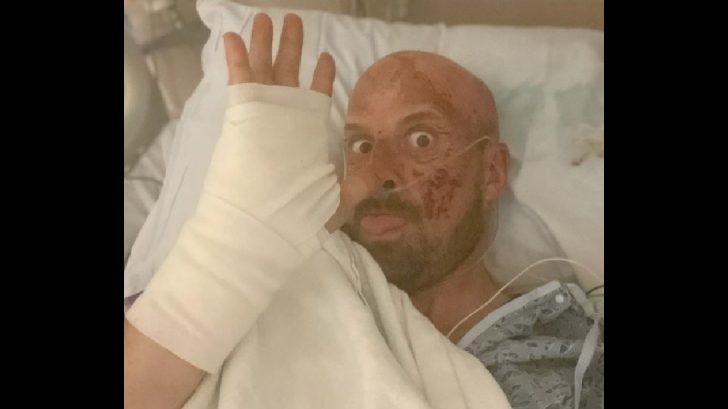 Less than a week after defying death in a terrifying stunt being filmed for America’s Got Talent: Extreme, Jonathan Goodwin has spoken out from his hospital bed.

In a post made to social media, Goodwin shared a photo of himself in a hospital bed with a bandaged hand and with injuries to his face. In the caption, the 40-year-old thanked fans for their support, saying:

“You can’t say you don’t get out what you put in. Ive tried my hardest over the years to be kind, thoughtful, honest supportive and good. A couple of days ago my life took a complete left turn… and the out pouring of love from all the corners of the world; from people I didn’t even think would know or remember me… has just been astonishing,” Goodwin wrote. “Thank you to everyone who has reached out and sent their love and support. It literally has been a lifesaver.”

Goodwin then laughed at the fact that he cheated death.

“To death I say nananana boo boo… and to the rest of you… watch this space. There is a long road to recovery and that won’t look like what it did…” he wrote. “But I have a lot left to do in this world. Maybe we can make something good together?”

Last Thursday (October 14), while rehearsing for America’s Got Talent: Extreme at the Atlanta Motor Speedway, Goodwin was “suspended 70 feet in the air in a straitjacket hanging by his feet from a wire” with two cars “suspended on either side of him swinging back and forth,” according to TMZ. The stunt required Goodwin to free himself in order to land on an air mattress below. Instead, the escape artist was “sandwiched” in between the two cars after they smashed together.

“Our thoughts and prayers remain with Jonathan Goodwin and his family as he continues to recover from his accident on Thursday,” the show said in a statement. “The health and safety of our cast and crew continue to be our priority.”

Goodwin appeared on season 13 of “Britain’s Got Talent” in 2019, making it to the finals where he finished eighth. The following year, he made it to the semi-finals on season 15 of “America’s Got Talent.”