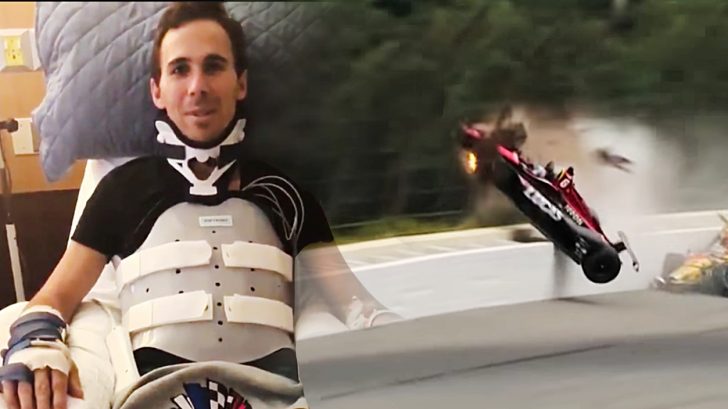 Just under one month after his near-fatal accident at Pocono Raceway, this young driver has broken his silence for the first time ever…

Robert Wickens, 29, suffered one of the most horrifying crashes the world of IndyCar has seen in recent years. Early on in the 2018 ABC Supply 500, Wickens collided with Ryan Hunter-Reay and his car was launched into the catch-fence, flying out of control and being completely obliterated. He was truly lucky to have survived.

The cars slightly touched, causing Hunter-Reay’s car to slam into the outer wall, but Wickens got dragged along with him and launched up over the wall – flying into the catch fence and ripping his car to shreds as he flipped over and over.

The fencing he catapulted into was shredded and so was his car – which came to rest near an inside wall and was reduced just to the tub of the car. Emergency personnel rushed to his aid and he was flown via medivac to an Allentown, PA hospital.

Now, while he was reported as “awake and alert” after arriving at the hospital, doctors were uncertain of his spinal damage for a number of weeks following.

Wickens has undergone multiple surgeries in the recent weeks as his family and friends stood by his side during this terrifying time. He is expected to recover from the majority of his injuries, but whether or not he will be able to race again remains to be seen.

In a September 6th update, his Schmidt Peterson Motorsports team and his family released a full list of his injuries.

“The road to Robert’s recovery will be a long and tough one, but we hope you’ll be alongside us cheering him on. BETTER. STRONGER. FASTER,” the team wrote in the release.

I was there for you then, I’m here for now, I’ll be there for whatever you need to get back! Missing my little bro big time, but he’s in good hands. Sorry I’ve been MIA but thank you so much for all the messages & support for @robertwickens. Gotta bring him home some hardware! pic.twitter.com/gPAMzCeuLv

Now, Wickens is speaking out for the very first time in a video posted to his social media accounts. The young driver can be seen in a hospital bed, fitted with braces and surrounded by pillows as he speaks optimistically about his uncertain future.

With a smile, Wickens opened up about his absence from social media in light of his injuries and thanked everyone for their unending support and prayers in his time of need.

“I’m in rehab now, trying to get back to 100% as quickly as possible, but I don’t know what the future holds for me,” he admitted and expressed his desire to race again.

When Wickens was first admitted to the hospital following this insane crash and was unable to breathe without the assistance of a machine. Clearly, he has made great strides in his recovery – however doctors still have not revealed the extent of his spinal damage.

Watch Robert Wickens’ first statement following his crash below along with a news report about him from WTHR 13.

Just wanted to say a few words, and also good-luck to everyone in Sonoma this weekend!