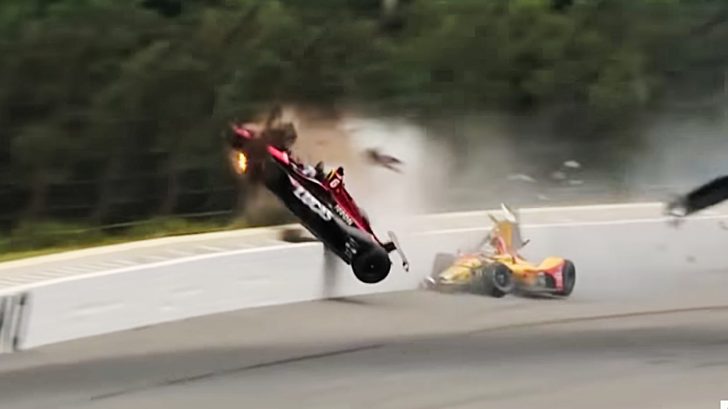 He was airlifted to the hospital after a severe crash at Pocono destroyed his car and left him with significant injuries on Sunday, August 19th.

Just months ago, during the 2018 ABC Supply 500, following a restart on Lap 7, 29-year-old Canadian INDYCAR driver Robert Wickens was running side-by-side with American Indy champ Ryan Hunter-Reay when Wickens tried to pass him.

The cars slightly touched, causing Hunter-Reay’s car to slam into the outer wall, but Wickens got dragged along with him and launched up over the wall – flying into the catch fence and ripping his car to shreds as he flipped over and over.

BRUTAL CRASH!!! Wickens crash in slow motion… ??? Robert Wickens is awake and alert. He has been transported by helicopter to Lehigh Valley Hospital-Cedar Crest. #Indycar#Pocono pic.twitter.com/ttoTSGlW35

The fencing he catapulted into was shredded and so was his car – which came to rest near an inside wall and was reduced just to the tub of the car. Emergency personnel rushed to his aid and he was flown via medivac to an Allentown, PA hospital.

Now, while he was reported as “awake and alert” after arriving at the hospital, doctors are unsure of how much spinal damage he has suffered…

Robert Wickens has been admitted to Lehigh Valley Cedar Crest Hospital in Allentown with orthopedic injuries. He is still being evaluated.

Update on the IndyCar race at Pocono: still under Red Flag conditions for catchfence repairs on Lap 9, after a big crash for Robert Wickens. News is that the Schmidt-Peterson driver is awake and alert and has been transported to hospital. #IndyCar #ABCSupply500 pic.twitter.com/gVQmbyNOQ5

In the few short months since this truly terrifying crash, Robert Wickens has been providing updates to fans along with his team, Schmidt Peterson. For quite some time, neither party has disclosed to the public the state of his spinal injuries that had been declared “unknown” by doctors in previous statements.

In mid-September, Wickens posted a video for fans that had him speaking to them for the very first time since the accident. In it, he sounded cheerful and spoke with a great and positive outlook, saying he is “trying to get back to 100% as soon as possible” adding that it was “unknown” what the future holds.

Just wanted to say a few words, and also good-luck to everyone in Sonoma this weekend!

Now, in a brand-new update to fans, Wickens has confirmed the crash left him paralyzed and explained his outlook for the future and how he’s dealing with it.

The 29-year-old Canadian motorsports star posted a video on Thursday, October 25th, 2018 of his “first slide transfer as a paraplegic” and said that while he’s only been sharing videos of him moving in small ways, the truth of the matter is that there is a great deal more work to be done.

“The reality is I am far away from walking on my own,” he wrote in the video’s caption. “Some people are a bit confused with the severity of my injury, so I wanted to let you know the reality of it. I’ve never worked harder for anything in my life, and I am giving it all I’ve got to spark those nerves in my legs.”

The video is heartbreaking to watch, but it’s a true testament to his dedication and willpower for his rehab efforts. There is no doubt from him or his team that he will walk again. He just has to keep on keepin’ on!

Our thoughts and prayers are with Robert Wickens during this very difficult and trying time and we cannot wait to see him walk again!

Watch his video below and share your thoughts and kind words in the comments.

Did my first slide transfer as a paraplegic today. My upper body is getting stronger and stronger and hopefully I’ll be able to do it unassisted soon. I’ve only been posting videos of the small movement in my legs, but the reality is I am far away from walking on my own. Some people are a bit confused with the severity of my injury, so I wanted let you know the reality of it. I’ve never worked harder for anything in my life, and I am giving it all I’ve got to spark those nerves in my legs. ??