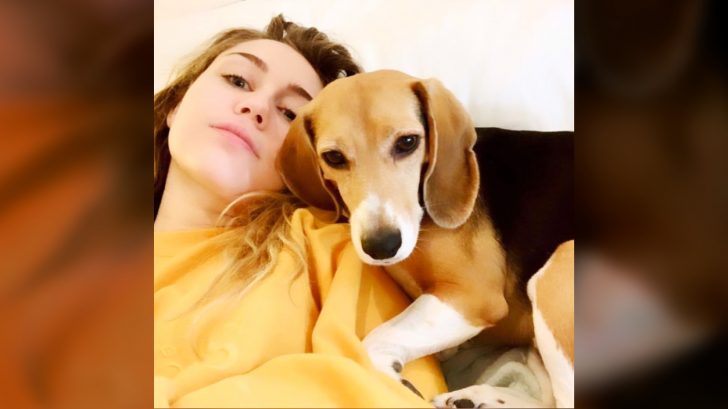 In 2016, Miley Cyrus joined The Voice as a coach for Season 11 alongside Blake Shelton, Adam Levine, and Alicia Keys. She also returned for Season 13.

She did lots of interviews and behind the scenes clips with the show while she was a coach, but she’s finally opening up about something that happened on set that she’s never talked about before. During an radio interview with Geena the Latina and Frankie V Morning Show, the singer revealed that something terrible happened to her dog, Little Dog, on her first day on set.

She was asked about the most embarrassing story involving one of her many dogs and couldn’t say the answer due to its inappropriateness, but did offer up another story.

“This is sad, but it was handled and my dog is totally thriving and fine,” she said before revealing that Little Dog got electrocuted.

“You know on sets there’s, like, wires everywhere. We got all the people singing, everyone is huddled around, like, ‘Who’s going to win The Voice?’ And my dog goes and bites on to the wires of the TV everyone’s watching and all of a sudden, we notice she’s convulsing and she’s getting electrocuted,” she said. “And you can’t open her mouth because the person who’s trying to open her mouth is also being electrocuted. But she was totally fine.“

This was years ago and Cyrus reiterated that Little Dog is currently “thriving in Nashville, Tennessee and doing great.”

What a scary moment! We’re glad the dog is okay! Watch the full interview below.