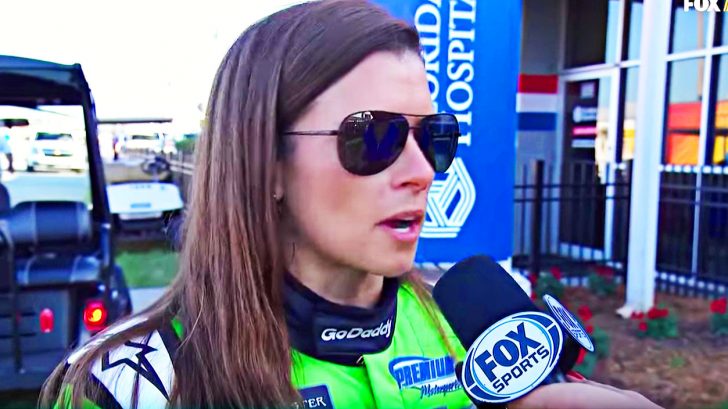 Hot off the heels of her final NASCAR race, the sports most-successful female driver opens up about her career – and how she went from being just “one of the boys” to a sex symbol.

Danica Patrick is not only NASCAR’s most-successful female driver in the sport’s history – but also one of the most-recognized, famous, and valuable celebrities to emerge from the sport.

Throughout her time in NASCAR, she grew her own brand and began developing sideline businesses that have blossomed into a mini-empire and generated her a net worth in excess of $60 million.

In addition to Dale Earnhardt Jr., Patrick is one of the only drivers to achieve such status as a visible celebrity that they become a household name. It wasn’t until she says she embraced her feminism that the tides really turned for her – and that was helped, in part, by GoDaddy.

I say Danica Patrick is the most coolest chick on Earth. She's the first woman to take Daytona 500 pole! pic.twitter.com/A4PnAvfT

Speaking to Fox Sports’ Jamie Little in a career-ending interview, Patrick explained how she viewed herself and what adage she lives by that helped cement her choice to take a “sex sells” approach in growing her own career and businesses.

“You were just set out to be a race car driver – you were one of the guys,” Little commented. “But then you started embracing your femininity and you were okay being open about it – do you feel like there was that transition?”

The first copies of @prettyintensebydanica just came in! Preorders release December 26! I poured a lot into this book over the last year. I wrote the table of contents and then a section for each chapter, edited every word of every chapter, produced my photo shoot, wrote and photographed every recipe, wrote every workout in the 12 week program (7 per week, none the same), tested every workout, and ran a focus group test to make sure it kicked ass! After my sister read it she said, “it sounded like you”. And for the picture lovers out there (like me), there’s almost 100 photos of me and a bunch of amazing before and after pics, as well as their story. http://bit.ly/PrettyIntenseBNSigned Happy holidays!

Laughing a bit, Patrick agreed with Little, saying that indeed she did feel that transition happen.

“I mean, I’m trying to avoid the saying ‘sex sells,’ but, um, you know I think you have to use all of your attributes,” Patrick admitted. “If you’re funny, play it up. If you’re a daredevil, show it off. But it all has to be backed up by ability.”

Danica Patrick was always talked about as being the most successful female driver to ever appear in the sport, and while she didn’t always match some of the top male drivers, she certainly made a name for herself – and a whole lot of cash.

Watch Danica Patrick’s career recap with Jamie Little below and let us know what you think.