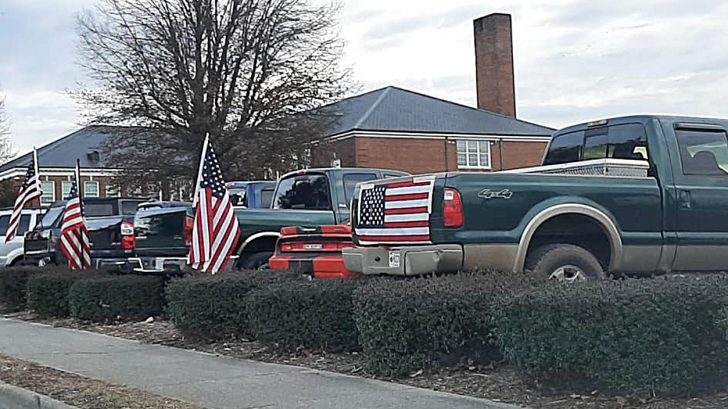 The kids from Franklin County High School rallied together on February 4th, 2020, to show support to one of their fellow peers and love for their country after an administrator told one of the boys that he couldn’t fly the American flag on the back of his truck.

“My son called me from school saying that he saw an administrator around his truck and is now being called to the office,” the mother of one of the students told BTW21.

Once the other kids found out that the administrator told the boy to remove his flag they all decided to fly their flags on the back of their trucks the very next day. One of the boy’s mother recorded the teenagers driving past like a convoy of American rebels with each vehicle rocking that red, white and blue.

According to BTW21, principal Jon Crutchfield called the boy’s mother and told her it was a big misunderstanding that should have never gone this far. She then said that the administrator should apologize to the boys because it’s not breaking the rules to fly the flag.

The high schoolers were allowed to fly their flags again after the situation escalated to this level. News agencies have reached out to the high school for more information but haven’t heard back from them yet.

A public school in Virginia told a bunch of teens they could not fly Old Glory because it might offend people. So the next day the kids showed up to school driving pickup trucks and waving Old Glory – like any red-blooded patriot would do! A parent sent me this video!