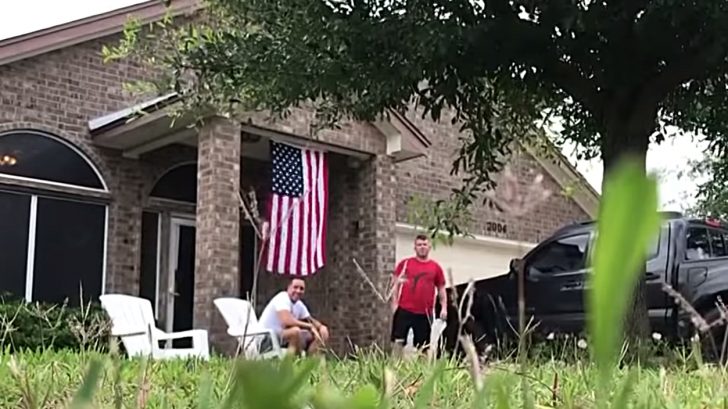 Army Sergeant Chris Link was fighting a battle with the homeowners association (HOA) in May 2019 due to not removing his American flag after they asked him to. The HOA issued a warning statement to him that if he doesn’t remove it he will be fined.

This news comes out of Texas in an urban community of homeowners and Chris says he was shocked when he received an email about it. The email stated that he could not have a flagpole in his yard with the American flag on it so Chris took down the flag pole and simply hung his flag on the porch.

Then they sent him another email saying, “You cannot display your flag. We have gone through this with a number of homeowners. Please remove it, or I will have your fine sent out today.”

At this point, Chris emailed the HOA stating that he had the right to display his flag and that right was protected by the Freedom to Display the American Flag Act of 2005. Multiple neighbors decided to join forces with Chris and hang American flags in their yard in protest of the HOA’s rules.

Chris says that the flag means more to him than a lot of people realize and he’s willing to take it as far as it needs to go to keep his red, white, and blue on display. He hired a lawyer and within a matter of days the lawyer proved that Chris had not “violated any valid or enforceable provisions of the HOA bylaws.” The HOA was forced to back down and let the active military man fly his flag proudly in his front yard.

“This is great news,” Chris said in a phone conversation with KCENTV. “This shouldn’t have been an issue to begin with. I mean, it’s great news that they’re dropping it, and as far as my property management, as long as nothing happens there, I think everything is settled.”

He went on to say that people should know that displaying the American flag is a federally protected right to all citizens, no matter where you are located in the United States. Chris added that he doesn’t think the HOA or his property management is unpatriotic, nor does he hold a grudge against them. He’s simply fighting for his rights as an American and knows that others have faced a similar situation. He wants everyone to be aware of their rights and to stand up and fight for them.