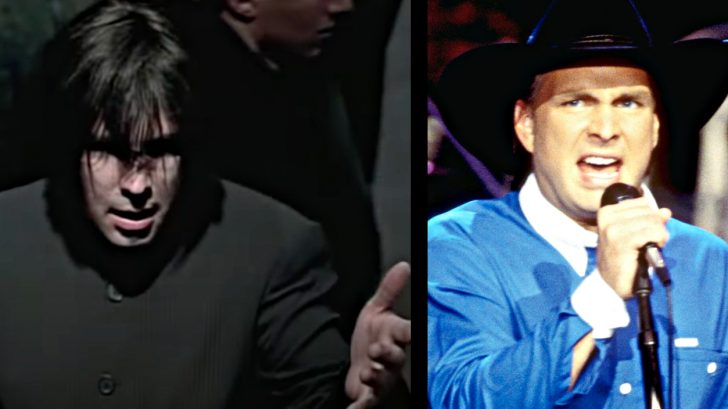 Garth Brooks is one of the world’s best-selling artists of all time, and during the height of his career, he took on another persona, confusing not only his fans, but the entire world.

On September 28, 1999, Brooks released an album that is now known by two titles, Greatest Hits and Garth Brooks in… The Life of Chris Gaines.

The album cover featured a long and dark-haired Brooks, as a musician named Chris Gaines, rocking a soul patch and a brooding look. It went to number two on the Billboard 200, and got him on the Billboard Hot 100 for the very first time. The song “Lost In You” peaked at number five on that chart.

Fans were not only confused as to who this Chris Gaines guy was, but also by the music the album produced. Brooks was at the top of the country game and this album, although billed as a rock n’ roll project, was definitely more in like with the pop genre.

Behind The Life of Chris Gaines

Chris Gaines was actually created as a character for a movie titled The Lamb. The album was intended to be the soundtrack to the movie, which was going to be about Gaines’ fictitious life, and was released a year in advance to try and pique interest in Chris Gaines. Ultimately, the film was never made, but we are left with a Gaines album, and multiple public television specials engrained in our memories.

Gaines was the subject of a Behind The Music-style mockumentary titled Behind The Life of Chris Gaines. He was given an elaborate backstory, with a USA swimming coach for a father and a former Australian olympian for a mom. Actors were hired to play Gaines’ friends in the mockumentary, and a few people appeared as themselves including musician/producer Don Was and music journalist Melinda Newman.

Gaines’ backstory was wild from his high school rock band years, to his father’s disapproval of his music, to selling 12 million copies of his solo record, to a sex addiction, to a horrific car accident and reconstructive face surgery.

Not only was Chris Gaines the subject of a mockumentary, he also famously served as the musical guest on the fifth episode of SNL’s 25th season, where he performed the song “Way of the Girl.” And guess who was the celebrity host? Garth Brooks…

A highlight of the episode was when cast member Tracy Morgan talks crap about Gaines to Brooks’ face, seemingly not knowing the two are one and the same!

After all their hard work promoting Chris Gaines, the album produced lack-luster sales only selling 700,000 copies by April 1, 2000. Seeing as his previous album sold over 10 million copies, this was very disappointing for a successful artist like Brooks.

The Chris Gaines album eventually sold two million albums, but in many critics’ eyes it was a total dud. By 2002, Brooks stopped mentioning The Lamb and Chris Gaines at all, and proved to everyone that he could still sell records, with his 2001 album Scarecrow hitting the five million mark in the United States alone.

Watch Gaines’ music video for “Lost in You” below.