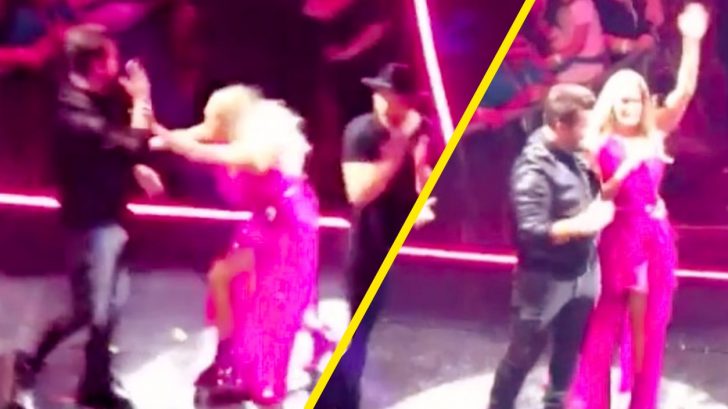 Carrie Underwood performed in numerous cities as part of her 2019 Cry Pretty Tour. One show that is sure to always stand out in her memory is the one that took place on October 17 in Louisville, Kentucky.

What made this show so memorable, you ask? Well, it’s because Underwood nearly fell down on stage in front of her thousands of adoring fans!

Anyone who has attended one of Underwood’s shows knows that she always dresses to the nines. Her concerts feature many wardrobe changes, as she sports a number of elaborate, sparkly costumes throughout the night.

Fun times in #Cleveland ?Thanks for coming!!! See ya’ next time! #CryPrettyTour360 ?: @jeffjohnsonimages

Underwood’s concert wardrobe also contains a number of high-heeled shoes, including sparkly, pink heeled boots that she wore at the end of every show.

Those boots caused a bit of a problem for Underwood at her Louisville concert. She was walking to line up with her band and say “goodnight” to the crowd when her boot caught on a break in the stage, and she tripped.

Thankfully, her guitarist, Steve Jeffers, was there to keep her from falling. As she tripped, Underwood reached out to Jeffers to regain her balance, and she did.

“I’m good!” she told the crowd after the little mishap.

Underwood later joked about the moment on Twitter, writing, “Our stage can be a dangerous place…especially in heels! We all put our lives on the line night after night for the sake of the music!!!”

She also shared a fan-filmed video of her near-fall.

Our stage can be a dangerous place…especially in heels! We all put our lives on the line night after night for the sake of the music!!! ??? Thankfully, @ChadJeffers was there to catch me! https://t.co/OXed9RIOjL

We’re glad that Underwood was able to catch herself before she fell on stage. Thank goodness Jeffers was there to help her brace herself!

Another memorable moment from Underwood’s Louisville concert was when a local fan named Sarah joined her to sing “The Champion.” You can check out that performance below.