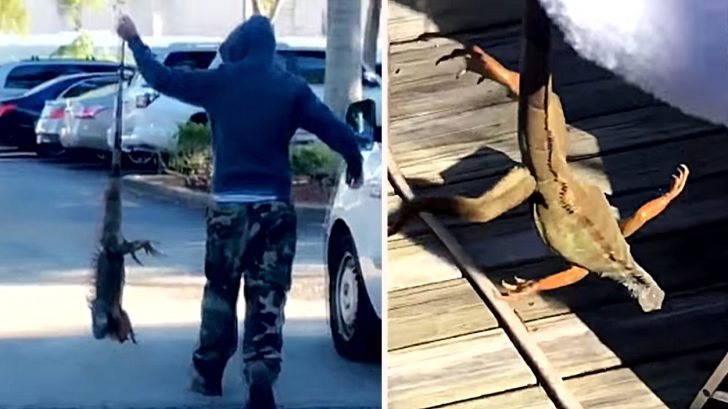 Iguanas Are Falling From The Sky In Florida

In southern Florida, people are experiencing bizarre incidents of hundreds of iguanas falling from trees everywhere, and the explanation is simple. It’s cold.

FROZEN IGUANAS – South Floridians aren't the only ones not used to this chilly weather. With falling temperatures also comes another unusual sight: falling iguanas. https://t.co/uxZXcwpfqg

The Cold Puts Them Into A Hibernation State

Iguanas are cold-blooded creatures and with the temperatures lately dropping into the 30s it’s putting them into a hibernation state and many people are in awe of all the iguanas laying on the ground.

They appear to be dead, however, they are not. They are basically frozen. Once temperatures drop below 50 degrees Fahrenheit iguanas bodies began to slow down. They become sluggish until it gets so cold they freeze into a hibernation state.

The scene at my backyard swimming pool this 40-degree South Florida morning: A frozen iguana. pic.twitter.com/SufdQI0QBx

Some People Finding Them Help Them Thaw Out

When this happens they lose their ability to grip onto trees, thus, is the reason they are falling from them. People are finding them on the road, on top of their cars, all over their backyard and even in their swimming pools.

“When the temperature goes down, they literally shut down, and they can no longer hold on to the trees,” Miami Zoo director said. “Which is why you get this phenomenon in South Florida that it’s raining iguanas.”

Some of the locals have decided to help the stunned iguanas thaw out by moving them from cold shadowy areas to warm sunshiny areas. The Zoo keeper said that they may look dead but once they get hit by a ray of sun they begin to come back to life.