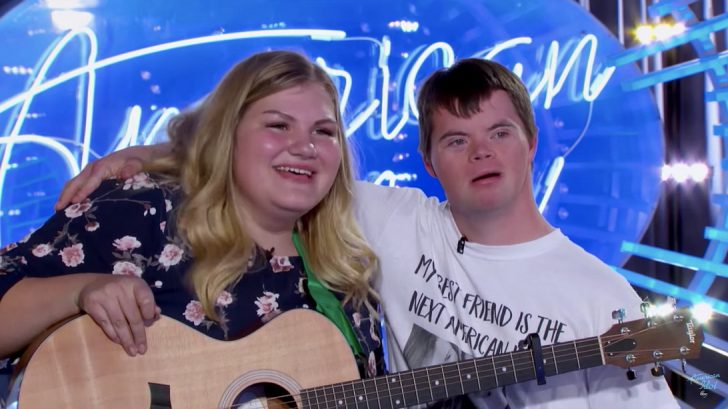 Have we mentioned lately how excited we are that American Idol is back? The dynamics between the new judges, Lionel Richie, Katy Perry and Luke Bryan, are very different from the show’s original judging trio, but the magic is still very much there as we watch aspiring artists from all walks of life take a chance in hopes that they might be the next Idol success story.

Even more inspiring than hearing the talent that has been hiding all over America is the amazing stories that they have to share. One story in particular had us in tears as we watched Sunday night’s audition episode.

Maddie Zahn is a 19-year old music therapist from Boise, Idaho, and is possibly the most kind-hearted contestant to ever audition for Idol. Zahn’s love for music and for others radiates from her and we were instantly drawn to her, before we even knew if she could sing.

In Maddie’s show package she shares the struggle of overcoming the physical setbacks of polycystic ovarian syndrome, including weight gain that destroyed her self-confidence. It was during the most difficult time in her life that she met her best friend, Marcus, who has down syndrome.

“I accidentally walked into a music class for kids with disabilities. It turns out that was the best mistake I ever made because there was just this incredible human being, standing up, singing a Katy Perry song,” Maddie recalls. “He was just someone that I needed to meet. I could sense that he could use a friend too.”

With Marcus’s help, Maddie regained the confidence she needed to do what she loves, and we’re so very glad she did. “I’m excited to embrace who I am and to stand up for those who might not fit the mould,” she said before she appeared in front of the all-star panel of judges.

As Maddie introduced herself, she also introduced Marcus. The judges invited him to sit at their table for Maddie’s audition. It was obvious that the judges were hopeful that Maddie could sing because she had won them over with her incredibly sweet spirit. So, as she started singing “New Rules” by Dua Lipa, Luke Bryan couldn’t contain his excitement.

After her solo performance, Marcus joined Maddie to sing Katy Perry’s song “Firework,” and our hearts melted as we witnessed the incredible bond that Marcus and Maddie share.

Needless to say, the judges sent Maddie Zahn through to the next round of competition in Hollywood and agreed that she’s a force to be reckoned with.

Dare we say that Maddie might just be the next American Idol? While she’s not country, her voice is one of the best we’ve heard thus far in the competition. And, we can’t help but cheer for her to go far.

See Maddie Zahn’s American Idol audition in the video below.