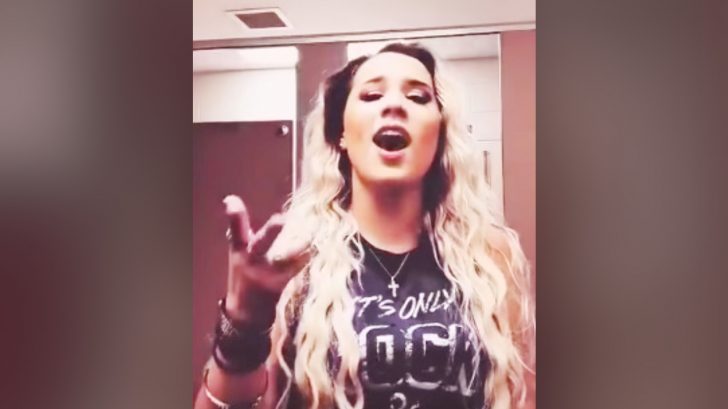 One of the main stars to emerge from the first season of the rebooted American Idol was third-place finisher, Gabby Barrett.

The 18-year-old singer was no stranger to country fans before appearing on the show. For years, she has dominated YouTube with her covers of country hits, with one of her most popular being Dolly Parton‘s “Jolene.”

Barrett’s star power grew on Idol, where she earned immense praise for her powerful voice.

It was a voice that reminded many viewers of a past winner…Carrie Underwood.

So imagine how excited Barrett’s fans must have been when it was announced that Underwood would be making an appearance on Idol to work with her and some of the other singers. The two even got the chance to sing together, and performed a powerhouse duet to Underwood’s sassy song “Last Name.”

But anyone who has been following Barrett for a while knows that she doesn’t just sing country music. She has dabbled with pop covers as well, performing renditions of songs by Whitney Houston and Adele.

The young singer took another turn and decided to show her spiritual side through one of her newest videos, which is a cover of a popular worship song y’all may know well.

A Switch In Style

Titled “What a Beautiful Name,” the song about salvation was released by Australian praise and worship group Hillsong Worship in January 2017. It was recognized with two Dove Awards in 2017 and took home a Grammy in 2018 for Best Contemporary Christian Music Performance/Song.

As she often does for her cover videos, Barrett opted to perform her rendition of “What a Beautiful Name” a cappella. With nothing to drown out her voice, Barrett didn’t hold anything back as she poured her whole heart into the song.

To make things even better, Barrett chose a bathroom as the makeshift stage for her worship performance. The acoustics in the bathroom were brilliant, and made her voice ring throughout the room.

Even though Barrett’s performance clocks in at only 28 seconds long, those few seconds give you more than enough time to understand just how talented she is. They also tease you a bit, making you hopeful that she’ll one day release a full cover of this beloved worship tune.

Until then, enjoy the snippet of Barrett singing “What a Beautiful Name” in the clip below. It’s so good, it’ll leave you shouting “amen!” by the end.