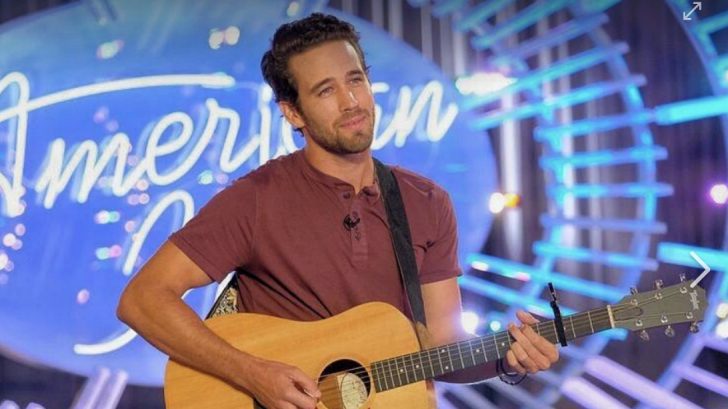 One of the most talked about auditions of the American Idol reboot premiere was that of 27-year old Trevor Holmes. Holmes pretty much won his audition before he ever started singing as he won the judges over with his stunning good looks.

As Holmes entered the audition room, judge Luke Bryan exclaimed, “Good Lord, you’re a dreamboat!” Katy Perry was immediately smitten and didn’t hold back her feelings about Holmes. “You’re so hot,” Perry said. “First of all, only hot guys are typically named Trevor. He’s hot, he does construction on the side and he loves his mom.”

Holmes then began singing Brett Young’s mega-hit “In Case You Didn’t Know,” captivating the entire judging panel (and America) with his voice. The panel unanimously agreed to send Holmes to the next round in Hollywood, and as Katy Perry started making her way to the singer to give him a congratulatory hug, his girlfriend rushed into the room.

As all of America watched, we all wondered what exactly Holmes’ girlfriend would think when she saw what had unfolded in the moments prior to her entering the room, and how did Trevor feel about being hit on by Katy Perry. Well, now we know. Trevor and his girlfriend, Sierra Neilsen, appeared on Good Morning America Thursday morning where they shared their feelings about the audition.

When asked what was going through his mind when Katy Perry started flirting with him, Trevor said the moment was surreal. “Everybody growing up, you kind of have this celebrity crush that you never think you’ll actually meet. Under my circumstance, I had to go in and sing in front of her. To have her like…I’m singing my heart out and she’s flirting with me…you can’t really put it into words. It’s pretty surreal.”

Trevor’s girlfriend Sierra revealed that she didn’t have a problem with Katy Perry flirting with Trevor. “I was totally supportive of it. We all have celebrity crushes,” she said before admitting that she teased with Katy that they could share him.

Watch Trevor’s viral American Idol audition in the video below and let us know how you feel about it.