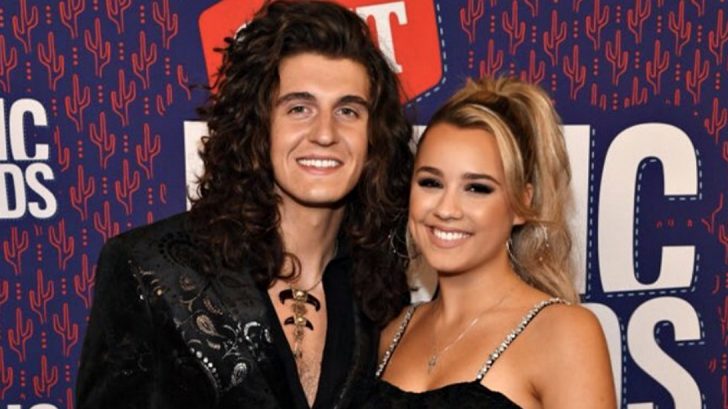 Congratulations are in order for American Idol albums Gabby Barrett and Cade Foehner! The couple wed in October 2019 and found out in May that they will be welcoming a new baby early next year.

Gabby and Cade met while both were competing on Season 16 of American Idol in 2018. Neither won the ultimate Idol title, though Barrett finished third and Foehner finished fifth. They got engaged in March of 2019 at the same hotel where they met while filming Idol, and wed shortly thereafter.

After wrapping her season of Idol, Barrett signed with Warner Nashville and released her debut country album, Goldmine, in June of this year. Her first single, “I Hope,” reached No. 1 on the Country Streaming Songs chart with 9 million U.S. streams for the week, making Barrett the first woman to score a No. 1 on that chart with her debut single. It also reached No. 1 on the Billboard Country Airplay chart and No. 1 on Billboard Hot Country Songs chart, making it the first female debut single to top the latter chart since 2006.

Cade, not only a talented vocalist but an incredible guitarist, lent his talent to his wife’s album and can be heard on most of the project’s tracks.

“Cade was a huge part of my album inspiration as well as a part of making the album,” Barrett said. “He cut guitar solos/parts all throughout so it’s made this project all the more special getting to do this with him. I’ve been writing for the past two years, so our love story kind of unfolded while the album did, and you’ll definitely hear that on songs like ‘Hall of Fame’ and my new single, ‘The Good Ones.'”

In a recent interview with Jeremy and Jinger Vuolo of The Hope We Hold podcast, Foehner said that he believes that his purpose on American Idol was to find his wife and take his place beside her.

“I really do feel like the reason I went to American Idol, the reason I was able to do music, was to go get my wife. I believe that with all my heart that I have my place beside her and supporting her and honoring her in this music,” Cade said. “It’s amazing to look at all this how it’s all funneled down to us being able to play music together and be a family.”

In an exclusive interview with PEOPLE, the couple shared that they found out while they were visiting Cade’s family in Texas. They had been praying about and hoping for a baby ever since they got marries, so they were thrilled with the news.

“We are very excited,” Barrett tells PEOPLE. “The Lord has blessed us with a little one, and we’re really excited to finally be able to share the news with everybody and just have a big old family celebration about it.”

Cade and Gabby also revealed to PEOPLE that their new addition will be a girl.

“I get to have two Gabbys!” Foehner says. “Ones not enough.”

“We were really excited whether it was a boy or a girl. I always wanted a girl growing up, as well as a boy, so to have a girl first is just really exciting. I hope she gets his hair — definitely not mine,” Gabby added.

Congratulations to Gabby and Cade!