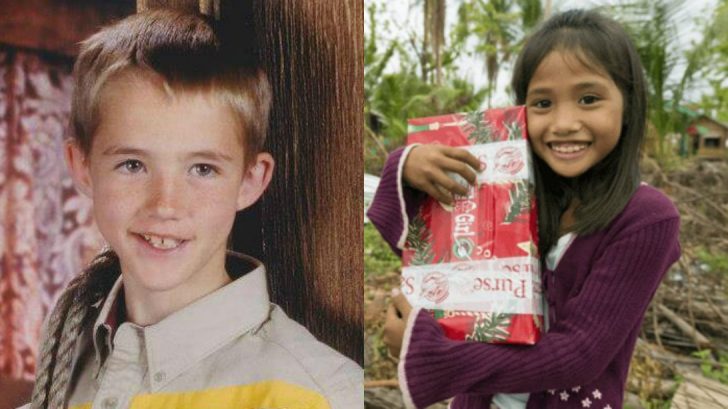 Christmas is the season of giving and opportunities to spread Christmas cheer are abundant. Whether you purchase gifts for strangers through the Angel Tree program, send cards to deployed soldiers, or leave generous tips for servers, one just never knows who they might meet or be a blessing to during the season. For one Idaho man, his generosity led him to the woman of his dreams.

In 2000, then-7-year-old Tyrel Wolfe packed a shoe box for Operation Christmas Child. The box included items that a girl his age might like along with a photo of himself dressed like a cowboy.

After turning the box in at his church, Wolfe didn’t give it much thought. But, a girl 7,000 miles away would never forget the special box she received during a vacation Bible school in Manila. Joana Marchan wrote a thank you note to Tyrel, but the note never arrived. For 11 years, Joana thought often about the boy who had sent her a Christmas box. She eventually took to Facebook to see if she could find Wolfe. She found him and sent a friend request, but Tyrel denied it because he didn’t recognize the name.

Two years later, Joana sent another friend request. Tyrel responded this time, asking Joana how they knew each other. She told him that she had been the recipient of his Christmas box so many years earlier. The two kept in touch and developed a deep friendship. Tyrel knew that he wanted to meet Joana face-to-face and saved his money for a plane ticket. A month after his high school graduation, the couple met for the first time.

“When I finally got there and saw her, I had to punch myself a couple times because I thought it was a dream,” Tyrel told People. “I was immediately attracted to her.”

Prior to Tyrel’s trip to the Philippines, the couple had agreed that he would ask Joana’s father’s permission for them to date before they took their relationship further. Joana’s father heartily agreed, but it wouldn’t be easy to maintain a long-distance relationship.

“I wanted to spend every moment I could with Joana while I was there, because once I left I didn’t know what would happen next,” Tyrel told People.

Upon Tyrel’s return to Idaho, the two stayed in touch through Facebook and talked via Skype whenever they could. Wolfe returned to the Philippines for a month-long visit the following November and asked Joana’s father for permission to marry her. The two wed on October 5, 2014 in Idaho and have since welcomed a son.

It just goes to show that you never know what might come out of your generosity and who you might encounter when you least expect it.