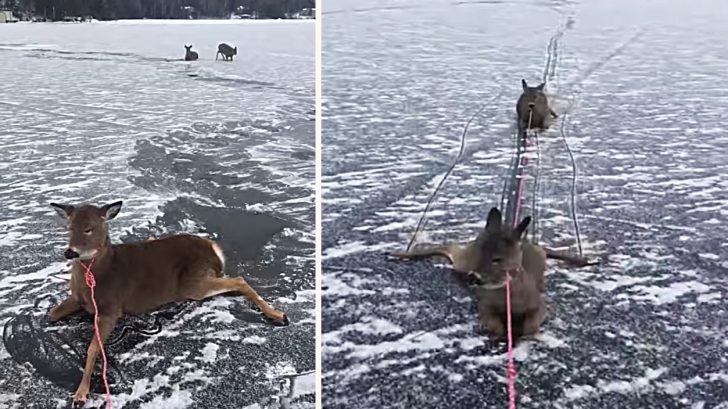 Ryan Peterson from Toronto, Canada was taking a relaxing lunch break ice skating on a frozen lake when he slid into being a hero to three deer who desperately needed some help.

The deer, one momma and what appeared to be her two offspring were spotted stranded in the middle of the lake. Ryan contacted the Ontario Natural Resources Ministry to come rescue the deer but the ice was too thin for them to bring a vehicle onto the ice so Ryan took action himself to get them to safety.

Getting The Deer Safely Back To Land

Ryan skated back to his job and grabbed some rope that he could use to tie around the deers’ necks and pull them back to the edge of the lake. While filming the whole rescue himself, he ties his rope around the momma deer first and gets her back to shore.

While she waits by the shore he goes back for her two babies and ties them both up at the same time. Ryan pulls them both back to her and unties them. Using a stick he nudges the deer to run into the forest and officially becomes a hero.

“The two younger ones took off running right away, but the doe stuck around with what seemed like an injured hip or leg,” Ryan told CTV News.

Watch Ryan Rescue The Deer In Video Below