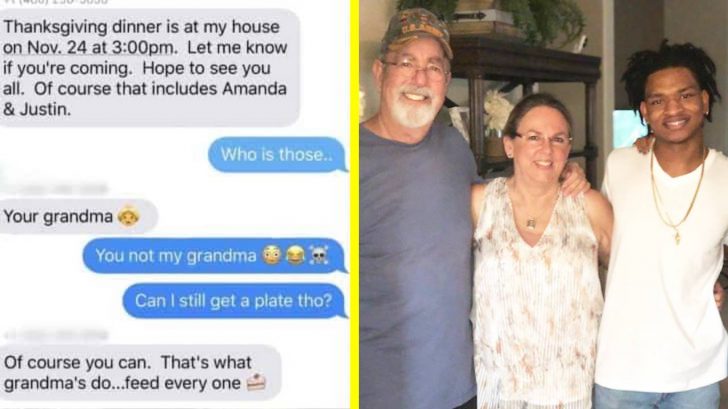 In the weeks leading up to Thanksgiving in 2016, 59-year-old grandmother Wanda Dench texted her 24-year-old grandson with the official invitation. Or so she thought.

Wanda’s grandson never ended up getting the text. That’s because it went to a number belonging to then-17-year-old Jamal Hinton.

He asked who was texting and Wanda responded, “Your grandma,” so Jamal asked for proof with a photo and he quickly found out a stranger texted him by mistake! He let her know right away – picture included – that he was not who she meant to text.

Jamal then asked if he could still come over for Thanksgiving, and Wanda said, “Of course you can. That’s what grandma’s [sic] do. Feed every one.”

See their 2016 text exchange below.

Somebody grandma is coming in clutch this year!! Ayee!!! pic.twitter.com/QGrx83nHLl

Their interaction went viral and people online were wondering if Jamal actually took Wanda up on her offer. Well, it turns out he did! And since then, they’ve made it a tradition. Jamal and his girlfriend Mikaela have gone to Wanda’s house every year for Thanksgiving dinner.

In fact, they don’t only see each other on Thanksgiving. Jamal told The New York Post that the two get together “about once every two months,” even though they live a few towns apart. Jamal lives in Phoenix and Wanda lives in Mesa.

“We’ve become really good friends,” he told The Post. “Unfortunately, our schedules don’t usually line up too well and we live an hour and a half apart, but we have managed to have a couple dinners at her house and restaurants.”

In October 2019, Jamal and Mikaela went to a pumpkin patch with Wanda and her husband Lonnie.

We went to the pumpkin patch today ? pic.twitter.com/91q9yMJAoa

If you’re wondering if Wanda and Jamal spent Thanksgiving together for the fourth time in 2019, Jamal confirmed they would be in September 2019.

Lonnie gave his followers the 2019 update.

Unfortunately, on April 1, Jamal revealed to everyone that both Lonnie and Wanda had contracted COVID-19 and were in the hospital battling the virus, as well as pneumonia.

I am so sad to announce that Wanda and Lonnie both have COVID-19 and that Lonnie is currently in the hospital fighting both COVID and Pneumonia please send words of love and encouragement their way ??? pic.twitter.com/tUNpUB20qg

About a week later, on April 8, Jamal took to Twitter once again to reveal that Lonnie had passed away the morning of Sunday, April 5 due to complications from the virus. He also said that Wanda told him that Lonnie knew about everyone who was praying for him and supporting him through this.

As some of you may have already found out tonight Lonnie did not make it… he passed away Sunday morning? but Wanda told me all the love and support he was receiving put a huge smile on his face so I thank every single one of you guys for that!??❤️ https://t.co/tNvals0FMh

Come Thanksgiving this year, there will be one less plate at the table, but we’re sure Jamal will be there for Wanda, just like she had been there for him.

Our thoughts and prayers are with the Dench family at this time.