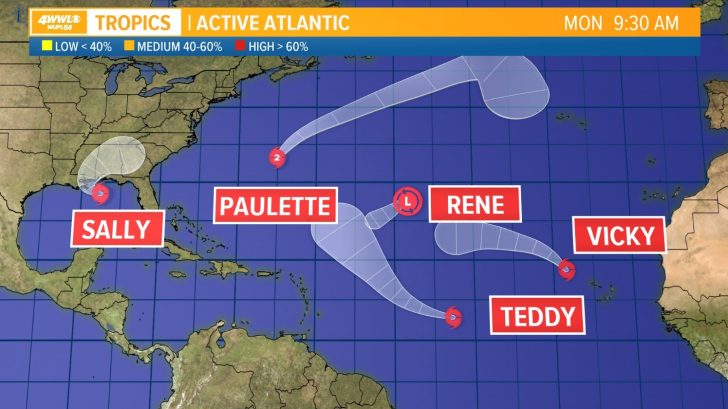 Sweeping fast toward the Southern Coast of the United States, tropical storm Sally has now been upgraded to a category two hurricane and is expected to make landfall as a category three.

An AP report says that Sally is gathering strength quickly as she approaches the coastline over the next 24 hours. Currently, winds are peaking just above 100 miles per hour, however, it could grow significantly stronger during the final hours of its march toward land.

“Since Sally is forecast to be moving very slowly around the time of landfall, a slower rate of weakening is indicated since a large portion of the circulation will remain over water for some time,” the National Weather Service said.

The storm is predicted to hit parts of Lousiana’s coastline as some Southern states are still reeling from the damage caused by Hurricane Laura just weeks ago.

Both Louisiana and Mississippi have been approved for emergency declarations by the White House and Governor Tate Reeves has said that officials are working on a plan for mandatory evacuations.

Following up behind Hurricane Sally are four more tropical storms that have grown large enough to be named and are all expected to pose a risk to the United States and other areas at some point.

None have been declared to exceed tropical storm conditions, but this does show a very, very active season – and brings worry as the US coastline is already two hurricanes deep this season.

THIS IS UNREAL! There are now 5 named storms in the Atlantic Basin right now: #Paulette #Rene #Sally #Teddy #Vicky. There you have it…the forecasters were right about a VERY active hurricane season.