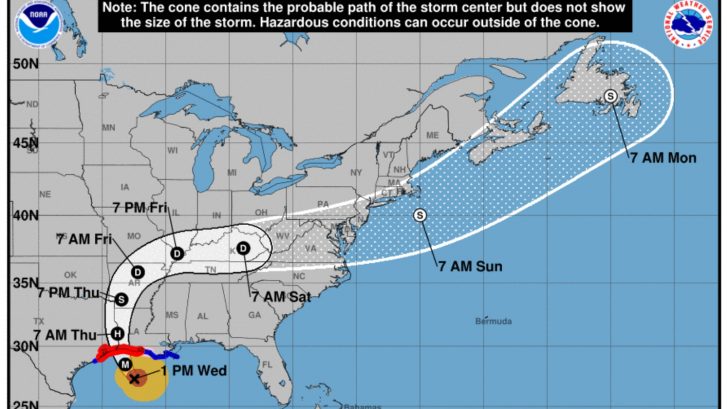 Expected to make landfall in Texas and Lousiana late on Wednesday night (August 26th), Hurricane Laura has been predicted to strike the coast as a category four storm that will leave behind a massive amount of death and destruction in its path.

AN OFFSHORE SHELL BUOY IS REPORTING A 37.4 WAVE HEIGHT AND 94 MPH WIND GUST AT THAT LOCATION. HURRICANE KATRINA WAS 28.4 FT

According to the National Hurricane Center (as reported by NPR), many weather forecasters have said that they expect a storm surge from Laura to be “unsurvivable” and could reach as far as 30 miles from the shore.

Unsurvivable storm surge with large and destructive waves will cause catastrophic damage from Sea Rim State Park, Texas, to Intracoastal City, Louisiana, including Calcasieu and Sabine Lakes. This surge could penetrate up to 30 miles inland from the immediate coastline. #Laura pic.twitter.com/bV4jzT3Chd

As of Wednesday afternoon, Laura was already at category four strength with sustained winds peaking at 140 mph and is fully believed to remain as strong when it makes landfall late in the evening.

Weather experts have issued tornado warnings across parts of southern Louisiana and Texas with winds already picking up substantially across the coastlines. Flash flooding with severe winds have been predicted to last through Thursday night.

National Hurricane Center Director Ken Graham has called the storm “well-formed” and said that it will be “life-threatening.”

Those levels of storm surge are “not survivable,” Graham said.

The eye of the storm is currently sitting inside the Gulf of Mexico. Once the storm hits land, it’s predicted to move up north along the border of Texas and Louisiana, then across Arkansas and into several surrounding states as it disperses.