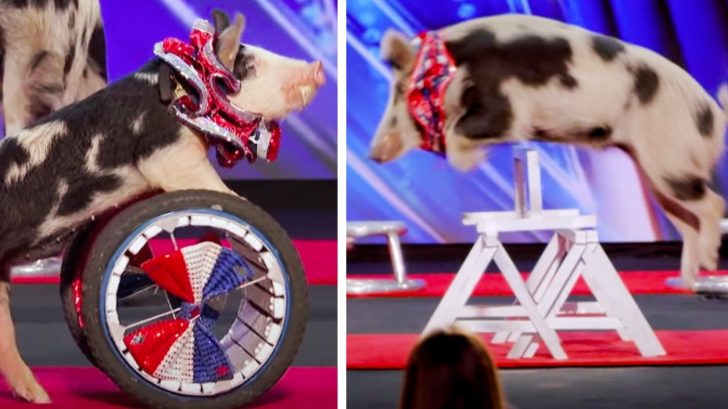 Just when the judges of America’s Got Talent thought they had seen it all, a group of talented pigs called the Pork Chop Revue proved them wrong!

The Pork Chop Revue was started in 1956 by Boyd Kimes. The about section on the group’s website says Boyd’s son, Les, took over as the leader of the Revue in the 80s.

Through the years, the Pork Chop Revue has traveled all over to share their pigs’ impressive tricks and comical antics. And now that they’ve been on AGT, millions of people have been able to witness just how talented pigs can be!

We're in LOVE with @porkchoprevue and these talented pigs! ❤️?https://t.co/rza8xgZhLo

Les and his wife, Nina, brought a bunch of their pigs to audition for Season 15 of AGT in front of judges Howie Mandel, Simon Cowell, Heidi Klum, and Sofia Vergara. The judges were instantly charmed by the pigs and their patriotic outfits, and waited to see what type of talents they would showcase.

Some of the pigs jumped hurdles, another pig dance with Nina, while the biggest pig stood on its hind legs and pushed a tiny piglet in a baby carriage. And that’s just naming a few of the many tricks the Pork Chop Revue put on display during their AGT audition!

The judges were clearly impressed with what they witnessed, and could be seen smiling throughout the audition. At the end, both Heidi and Howie rose to their feet to reward the group with a standing ovation.

Tune in to the clip below to watch the Pork Chop Revue win over the AGT judges with their outstanding talents! Who knew that pigs could pull off so many tricks?