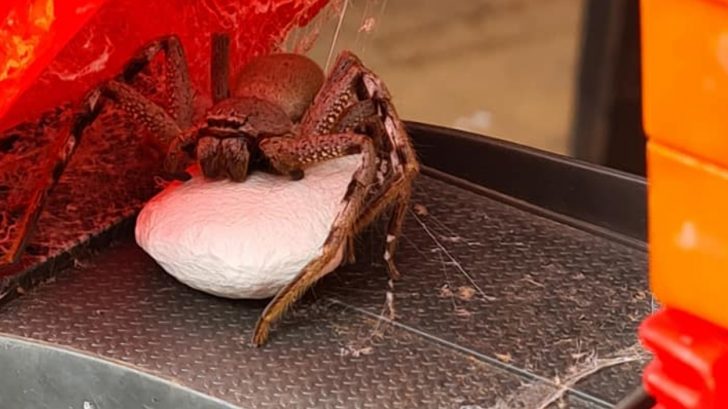 Huntsman spiders are commonly found in Australia and in other regions of the world. They are known to have a one-inch body and a leg length of up to five inches.

Brooke Thorpe who lives in Western Australia was enjoying her sunny day in the garden and watching her son and nephew playing together when she encountered one.

It happened when her two-year-old nephew brought her a red toy truck.

“My nephew brought me the truck to hold while he played with it,” Brooke said to Daily Mail.

She opened the back of the truck and was very astonished to find the massive huntsman spider guarding her egg sac containing hundreds of eggs inside.

“I was actually outside with my two pythons letting them get some sun when my nephew bought me this toy and I found this,” Brooke wrote on Facebook.

Brooke shared with Daily Mail that her son was “pretty happy with his cool find” and decided to let the huntsman spider stay in his truck in peace. “We have her in a safe spot and once she’s finished, my son can have his toy back,” she explained.

According to Dr. Robert Raven, an Arachnologist, who commented on the incident for DailyMail, “The mother spider is holding onto the egg to feel if there is any activity inside. The egg is still white, so she just laid them and the hundreds of babies are still developing.”

Brooke’s post on Facebook and has received more than 259 likes, 63 comments, and 10 shares. A few commenters had some things to say:

“I just love how they hug onto their egg sac,” Heather Lynette wrote on Brooke’s post.

“Awwwwwwww so precious, does she ever leave them to get food for herself?” Angelika Wiggin commented.

“Aww she is cuddling her baby’s [sic],” Nakita Mitchell said.