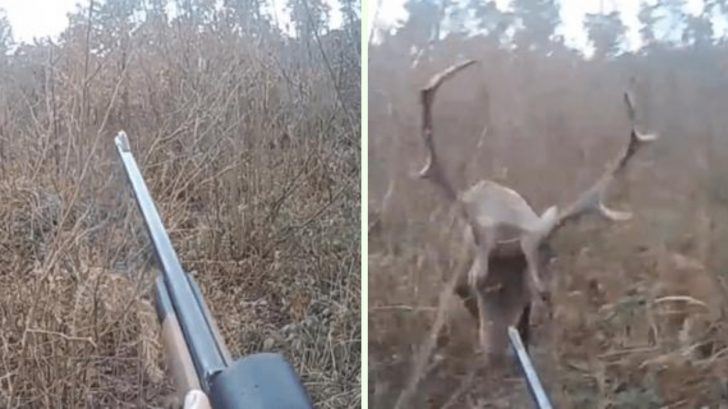 A man hunting in Poland captured a video of the moment a massive buck ran out of the forest, charged right at him, and gored him in the face.

The shocking footage was posted to social media showing the hunter standing in very tall grass with his gun in front of him ready to shoot, he hoped, a big buck.

He crept along in the grass and everything was nice and quiet when, all of a sudden, a young red stag came charging out of the bush and was coming directly toward him.

The stag looked like it was just trying to run past him but when the deer spotted the man it went into fight mode and turned his antlers toward the hunter.

Within the blink of an eye, the young stag gored him directly in the eye and knocked him down to the ground stunned and confused. The deer absolutely railroaded him.

According to Newsbreak, the hunter said, “At the last moment, he saw me standing at the position. He decides that his best option is to attack me. So he did. Stag turns in my direction and hits my head with his antlers. I didn’t pass out but I was struggling to get up for 10 minutes with blood coming out from the left eye area. One of the antler spikes broke my skull in the eye socket area. Then it went slightly into my brain.”

Fortunately, the man survived. He was transferred to the hospital shortly after that where he went through surgery to fix the damage the deer had done to him.

“After this event, I had to spend nearly one month in the hospital with two surgeries,” he said.

Many people who watched the video on social media were confused at why he didn’t fire his gun at the animal that was charging at him and he spoke out about why he didn’t.

“Just to clarify, in Poland we have regulations about taking red stags. I didn’t have a chance to properly judge this stag. So I decided not to shoot him. In 99.9% of those kinds of situations, red deer choose to run away from a hunter. This one had a different idea which is very rare,” the hunter said, according to Newsbreak.

Watch The Wild Footage Below