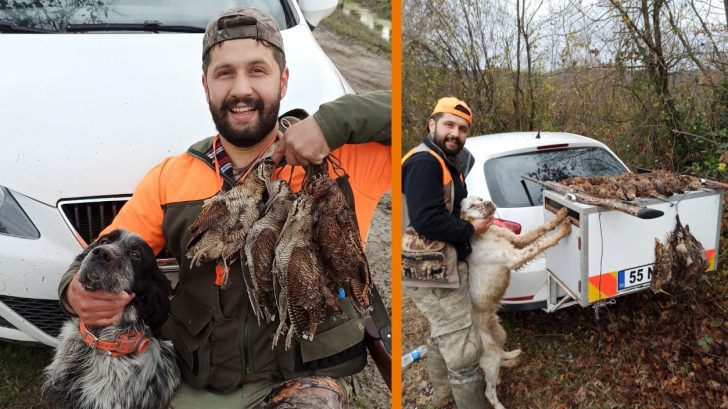 Thanksgiving ended very sadly for a hunter who was accidentally shot and killed by his dog while he was loading the animal into the trunk of his car and his pet stepped on the trigger of a shotgun causing it to go off.

The man had just become a father 10 days before the incident and was hunting on the Kizlan Plateau, in the Alacam District of Turkey’s Samsun province when it happened.

32-year-old Ozgur Gevrekoglu was packing up after the hunting trip and was about to return home from a weekend of hunting when he placed his loaded shotgun in the back of the car.

His hunting dog jumped into the trunk of the car and stepped on the trigger, accidentally shooting his owner dead at point-blank range. The shot was said to have killed him almost instantly.

The man’s body was taken to the Alacam State Hospital where he was officially pronounced dead and then transferred to the state capital, Samsun, for a post-mortem examination.

Before his tragic death, Ozgur posted many photos of his dogs on social media, however, it’s still not clear which dog was responsible for the unfortunate accident.

Some photos on his social media show him holding up a string of dead birds with one hand and petting a dog’s neck with the other leading some to believe that it was potentially that dog.

Some media outlets speculated that the dog killing the man claim may be a coverup for a murder but local authorities have said they are investigating the situation to make sure that his death wasn’t foul play.