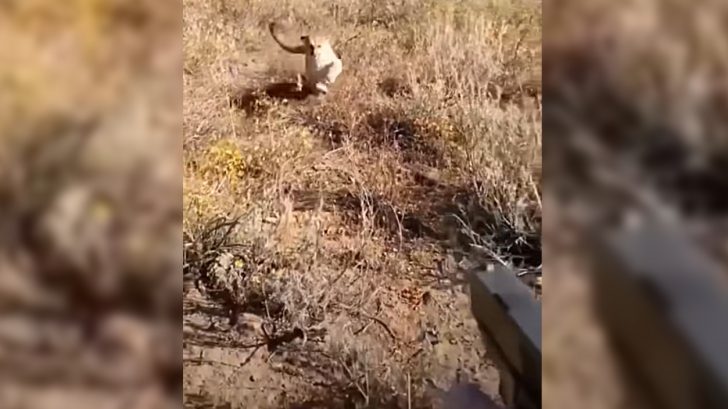 Here’s exactly what to do if a mountain lion is stalking you while you’re hunting by yourself.

Jared Erickson shared a video of a scary encounter while he was out hunting elk last Saturday, October 9 when a full-grown mountain lion stalked and charged at him in an attempt to make him its meal.

The elk hunter was participating in an early-season rifle hunt in southeast Idaho when a mountain lion approached him with its ears down and boldly walked towards him. Erickson pulls out his phone to capture what was about to unfold and it was scary to watch through our screens.

“That video was about the last half of our encounter,” he told Field & Stream. “The mountain lion had been stalking me for about 30 to 45 seconds before I got my phone out. That was my first confrontation with a predator.”

The video showed him pointing his 40 caliber Glock 27 at the mountain lion as it slowly walked toward him while he was backing up to get away from it.

Erickson held his cool for about 20 seconds into the video until the brave beast gets within 10ft of Erickson and charges at him. The big cat throws up its paw with sharp claws to scare him and begins to run at him giving Erickson no choice but to shoot at the animal.

Fortunately, for the animal, the bullet flew right past its head and fortunately for Erickson, the loud noise of the gun stopped the mountain lion from charging at him.

The bullet knocked up a cloud of dust behind the cat and it ran back a few feet. It then turned around to look at him as if it was thinking about continuing its pursuit.

Erickson fired off another shot which grazed over the lion’s back knocking up another cloud of dust and making a loud bang. This time, the mountain lion got the hint and turned around to walk away from Erickson.

The animal turned around one more time to look at him while he continued to film but then kept on walking into the tall grass and left Erickson alone.

Wildlife officials said that judging by the footage, the mountain lion was certainly being aggressive and Erickson did exactly what you’re supposed to do in that type of situation.

“If the mountain lion is less than 50 yards away, has its ears laid back, and is staring intensely at you or moves into hiding without any signs of leaving, an attack may occur at any time,” according to Hunter-ed.com. In the event of this type of encounter, the hunter-education organization says that hunters should “prepare to defend [themselves] using anything available as a weapon.”

Idaho Department of Fish and Game’s regional communications manager Terry Thompson said that mountain lion encounters like this one are extremely rare in the state.

“We haven’t had any attacks in Idaho for years,” Thompson told Field & Stream. “This [cat] looks like it’s kind of in stealth mode. That’s not a good sign. It’s in effect stalking him. It could have kittens back in those conifers and aspens in the background, but you’d never know. I’m surprised the guy held off as long as he did before he shot. This cat was really close. Erickson backed away and kept his eyes on it. What he did was right.”