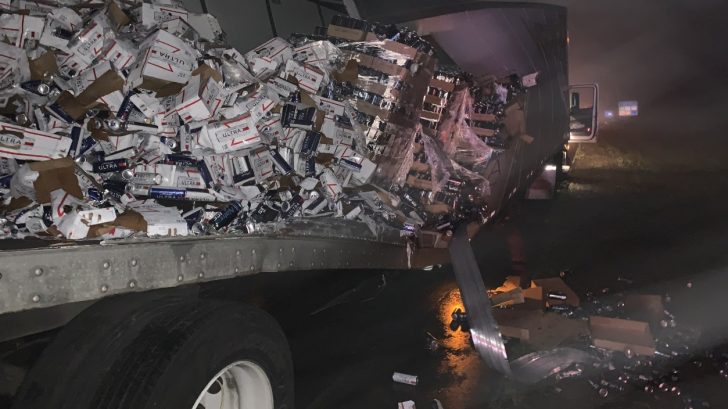 St. Johns County Sheriff’s Office shared a few photos on Twitter showing the aftermath of a semi-truck that crashed and split open with hundreds of cases of beer spilled out onto the highway.

“There is dense fog this morning so please drive w/ caution as first responders/utility workers work to clear the scene,” SJSO wrote on Twitter.

Who’s tryna get some beers??

The sheriff’s office reported that it happened on I95 at Mile Marker 305 near the Marineland Exit. The Florida Highway Patrol was quickly called out to the scene to deal with the situation and at this time, no injuries have been reported.

Photos showed half the side of the box trailer was completely cut open with an avalanche of Michelob ULTRA beer banged up, busted open, and spewing out the side of the rig. Two lanes on I95 were closed until the Florida Highway Patrol could clean up the wreckage.

News anchor Katie Jefferies for First Coast News alerted people to drive carefully near the crash and that traffic got down to just one lane. She jokingly added, or maybe she was serious when she said, there is, “No stopping to pick up a beer.”

Two southbound lanes on I95 are closed due to a crash at Mile Marker 305 (near the Marineland Exit). FHP is on scene & handling the crash.

There is dense fog this morning so please drive w/ caution as first responders/utility workers work to clear the scene. pic.twitter.com/1O7DQIMwPF