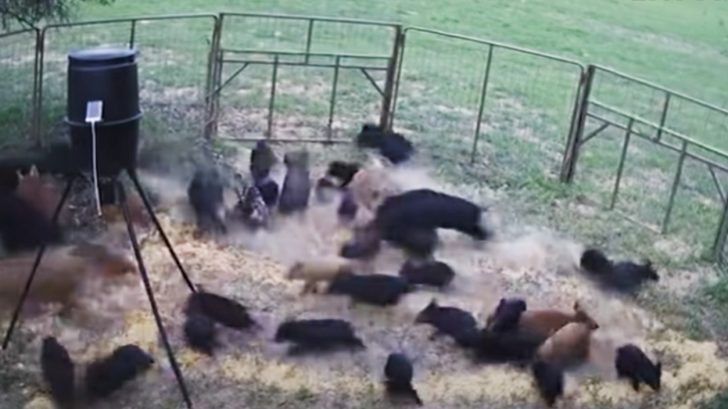 Texas is at war with an army of swine, and currently, the state is losing the battle.

Wild pigs are a destructive, invasive species that can destroy property and even injure people. According to Germania Insurance, the wild boars cause about $52 million in damages every year in Texas. The hog population is also extremely challenging to control. A sow begins breeding around the six-month mark and gives birth to piglets every twelve to fifteen months for up to eight years.

Texas is so desperate to handle their hog problem that tourists can rent helicopters and hunt the pigs from the air. (Only in Texas, right?) Still, some helicopter packages start at around two grand per person. That’s why some creative Texans design homemade traps.

One trapper showed off their engineering skills with a trap that captured 42 hogs simultaneously with a simple drop of a gate. In the video, the boars immediately realize their mistake and storm the cage. Even the camera rattles under the force of the pigs.

Check out the trap in the video below.

Would you want to hunt feral hogs out of a helicopter? Brush up on your wild pig knowledge in the next video.