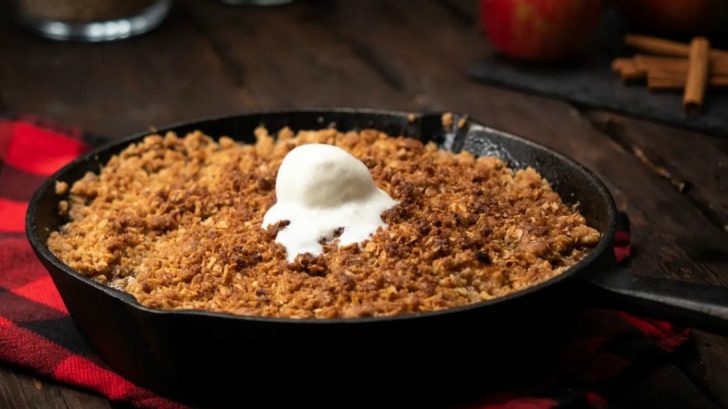 Nothing says “fall” like apples. From Granny Smith and Gala to Red Delicious and Fuji, apples are in abundance this time of year and the recipe possibilities are endless. But, we never fail to go back to the old trusty recipes we grew up on.

One of our favorites is apple crisp like grandma used to make. Served warm with a generous scoop of vanilla ice cream, this old-fashioned recipe is tough to beat!

The funny thing about apple crisp is that there aren’t many variations to the recipe. If you scour the internet you’ll find that most bloggers and recipe sites share very similar apple crisp recipes. Most commonly the dish is made up of layers of sliced apples that have been tossed with a butter, flour, and sugar mixture then topped with an oatmeal streusel before baking. It creates its own caramel-y sauce and crunchy topping as it bakes and is often served topped with ice cream or whipping cream.

We thought that apple crisp couldn’t get any better. “If it ain’t broke, don’t fix it,” as the saying goes. But, we were wrong. We took some advice from a grilling guru and smoked our most recent apple crisp and added a splash of bourbon. Our lives will never be the same. Smoked Bourbon Apple Crisp has forever changed the way that we will eat dessert. The smoked flavor pairs perfectly with apples and left us wondering why we hadn’t thought of smoking crisp before.

Check out the recipe for Smoked Apple Crisp below and give it a try!

INSTRUCTIONS
Preheat smoker to 325°F.
In a large bowl, toss together apples, brown sugar, bourbon, lemon juice vanilla and cinnamon.
Pour the filling into a large cast-iron skillet.
Stir together brown sugar, flour, and cinnamon. Cut in butter until mixture resembles coarse crumbs. Stir in oats and pecans. Spread topping mixture on top of the apples.
Place apple crisp in the smoker and smoke for 1 hour, or until apples are tender and topping is golden brown and crisp.
Remove from smoker and serve.