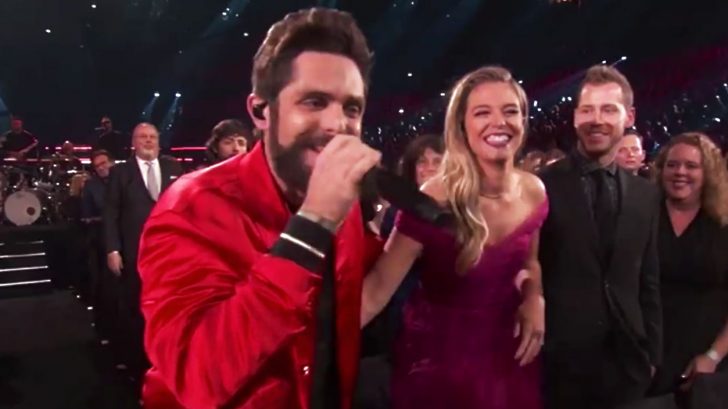 Thomas Rhett was a winner before he even stepped foot on the CMA Awards Red Carpet last night. The country singer won the award for Music Video of the Year for his heartfelt “Marry Me” video. Aside from musical accomplishments, he was also winning in the marriage department. Rhett’s wife, Lauren, looked drop-dead gorgeous with her swept hair and bright pink gown. Being one of Nashville’s most lovable couples, it was no wonder they complemented each other so well.

My wife is very attractive and I feel very grateful to be nominated and to be here??

Rhett performed his hit song “Life Changes” at the ceremony. The precious tune tells the story of how his life has changed since he’s met Lauren and the gifts that have come along since then. Mentioned as well are the couple’s two baby girls, Ada James, and Willa Gray. Rhett’s lively performance featured a full marching band that followed him around as he sang throughout the crowd. In his stylish red varsity jacket, Rhett decided to pay his wife a little visit during the production.

As Rhett jumped back down from the stage into the audience, he stopped right where his wife was sitting. As he goes up to sing in her face, she grabs him and gives him a big kiss on the cheek. Rhett loses it mid-performance and starts laughing instead of singing. Following, they both couldn’t wipe the smiles off their faces.

This country couple never fails to make us fall in love! Watch Rhett’s full performance below and his wife’s sweet treat.