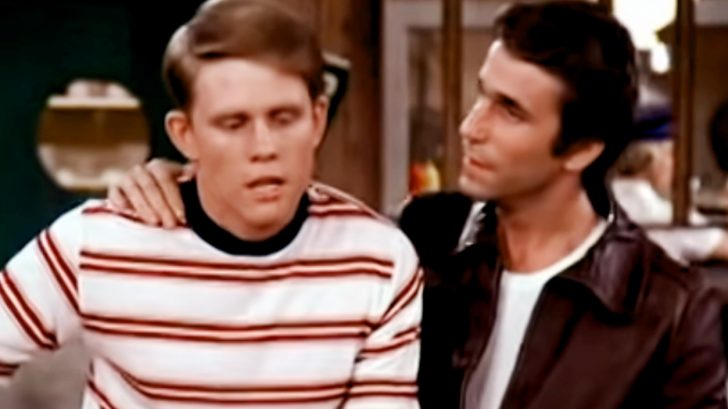 A true television classic, Happy Days ran for more than 10 seasons and filmed nearly 300 episodes…but very few people know that it almost had a drastic makeover after the second season aired.

Originally titled “Love and the Television Set,” the un-sold pilot episode aired in 1972 as part of a larger segment for ABC.

After Ron Howard earned the starring role in American Graffiti, the network took a harder look at the pilot episode to see if they could make something of it.

#ThisDayInHistory 1972 #ABC's LOVE AMERICAN STYLE airs a vignette called "Love and The Television Set" that's a cut-down of a failed 1971 pilot that ends up a new pilot for #HappyDays (and which in synd is retitled "Love and the Happy Days") Follow? @hwinkler4real @RealRonHoward pic.twitter.com/lIAlzc3yaB

Picked up by the network and retitled Happy Days – the first two seasons of the show ran throughout the spring and fall seasons of 1974…and focused on Richie Cunningham’s family, friends, and aimed to “honestly depict a wistful look back at adolescence.”

This is Richie Cunningham's brother Chuck from Happy Days. In season 2 he went upstairs and was never seen again on the show. WandaVision could easily pull a classic sitcom move and Quicksilver shows up once then never seen again pic.twitter.com/ae3gqNNwZd

Only considered a “moderate success” for its time, Happy Days‘ ratings began to drop off…so showrunner Garry Marshall started to rethink how they were going about things.

Marshall widened the scope of their comedy and shined a brighter light on a small character many of us now know by name – Fonzie.

Happy Birthday to Henry Winkler who turns 76 years young today – pictured here in 1974 as Fonzie during the filming of Season One of 'Happy Days' pic.twitter.com/K4ydW3QDm7

Along with this retooling of the show, network executives also wanted to adapt the name to be more focused around Fonzie – who audiences had gravitated toward.

“We had done two seasons…Henry (Winkler) had exploded in the character and it really was, that thing had set in. It would take another year or two to really peak but it was happening. Fred Silverman moved from CBS over to ABC. In the second season, Good Times with Jimmie “J.J.” Walker and [his catch phrase] ‘Dy-no-mite’ had started beating our show,” Ron Howard explained to Rob Lowe on his podcast.

“Fred Silverman basically beleieved that Fonzie with the whoa could beat J.J. with the ‘dy-no-mite’. But he wanted to go all the way to call the show Fonzie’s Happy Days. I declined to cooperate with that.”

So, almost a third of the way into the series, they nearly rebranded the show as “Fonzie’s Happy Days” – had it not been for Ron Howard.

Now, the show is a legendary hit that is still enjoyed by millions!

In fact, this beloved sitcom became so popular that it spawned multiple spin-off shows in the later years like Mork & Mindy and Laverne & Shirley.