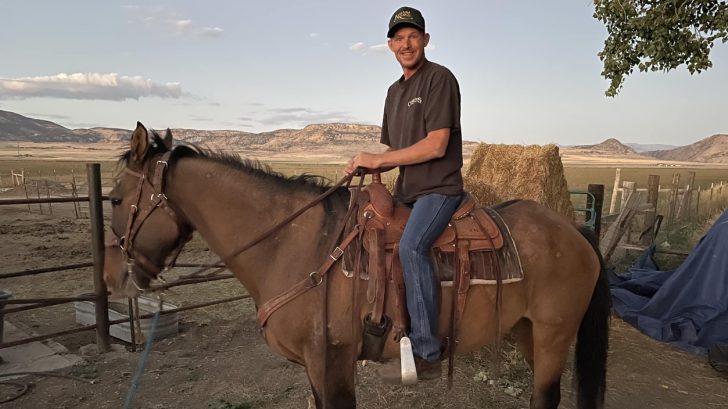 Shane Adams from Fielding, Utah said he was out camping in Utah’s West Desert with his horse Mongo when the animal got lost and ran away with a herd of wild mustangs.

Shane said Mongo was tied up outside his tent when he got lost in the early hours of a spring morning and made a run for it because he regrettably wasn’t tied up tight enough.

At the time, a group of wild mustangs was running past his campsite and Mongo ended up running off with his newfound friends never to be seen again for years.

Shane scrambled out of his tent half-dressed and tried to stop his horse but by that time it was too late–Mongo was gone. He called the Bureau of Land Management (BLM) and contacted everyone he could think of to notify them of the missing horse.

For three years, Shane traveled from his home in northern Utah to the West Desert every weekend searching for his beloved horse. While doing so, he bought just about everything you can imagine to help him find Mongo and get him home safely but he was never able to find him.

Eventually, after his money ran low and his time ran short, he had to stop making the trips to search for Mongo. Later on, Shane ended up buying another horse but kept Mongo’s personalized halter he had specially made for his “big goofy head.”

Shane’s children grew older and his son even made a country song about Mongo going missing, but the family thought the horse was gone forever.

Eight years later, the horse was miraculously found by BLM in the last week of September (2022) who were rounding up a herd of wild mustangs near a military property in Tooele County.

The bureau noticed that one of the horses was very tame, didn’t act like the rest of the other wild horses, and fell in step like he had been trained before.

They also noticed that the horse had a brand that matched the one Shane reported eight years ago.

Wildlife authorities called Shane and reunited the horse with his rightful owner and Mongo treated Shane as if they had never spent a day apart.

When he got the call that Mongo had been found, Shane thought to himself, “Never in my life. It’s crazy he still acts the same. Eight years of being wild and he acts like nothing ever happened,” Shane said, according to KUTV.

Mongo was a few hundred pounds underweight but was instantly ready to saddle up and go home. The horse is now 18 years old and Shane said he is working to get him back to a happy and healthy weight.

Listen To Shane’s Video Interview Below