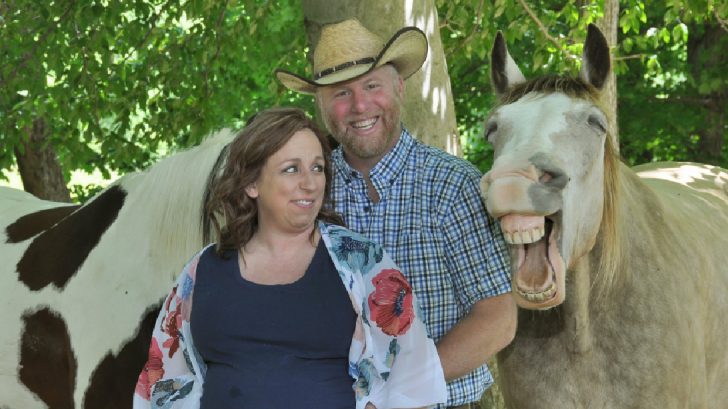 Parents-to-be are known to go above and beyond to make the most of the upcoming arrival of their new babies. From creative gender reveals to maternity photo shoots, no moment goes undocumented. One couple recently got more than they bargained for when a family pet stole the spotlight during their photo shoot.

During a maternity photo shoot with Amanda Eckstein and Phillip Werner, Cincinnati, Ohio, photographer Kristen Zaffiro was capturing scrapbook-worthy shots alongside the couple’s horses when one of the horses decided to “say cheese.”

The horse named Buckshot showed off his pearly whites in a big way when he snuggled up to the couple and grinned big. The horse’s antics had the couple and the photographer laughing. The photos went viral on Facebook with nearly 320,000 shares.

Eckstein, who is due any day, told TODAY Parents that she isn’t at all surprised that 12-year-old Buckshot stole the spotlight.

“Buckshot loves to be the center of attention and being in the midst of everything,” Eckstein, 37, said. “Like our maternity shoot is all about him. We were trying to get photos with the rest of our horses, and he would keep walking by. He knew what he was doing.”

Eckstein said that her horse is known for being ornery and often gets himself into trouble on the farm.

“He’ll open the gates and set the other horses loose,” she laughed. “He thinks it’s funny to bust through fences. He’s constantly doing silly things, like we’ve had horses untied in the middle of the night.”

See the photos that everyone is talking about below.